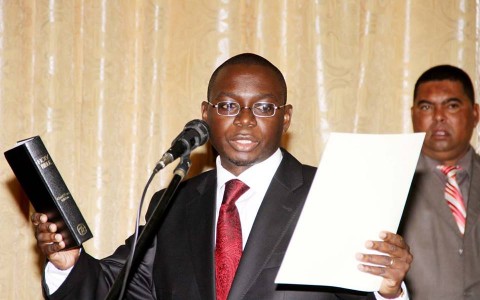 The President has also conferred Mr. Kalaluka with the status of State Counsel.

Mr. Lungu has further urged players in the legal fraternity to accept and work with Mr. Kalaluka.

He says history has it that many people who served as Attorney Generals in the past were young at the time of appointment.

And President Lungu has appointed and sworn in Chalwe Lombe as Foreign Affairs Permanent Secretary.

Mr. Lombe takes over from Mr. George Zulu who has been appointed Zambia’s High Commissioner to Australia.

President Lungu has challenged Mr. Lombe to use his civil service experience as Director Political Affairs at the Ministry of Foreign Affairs to quickly put in place a new foreign policy.

He says he wants Zambians in the diaspora to participate actively in the governance of the Country such as voting.

And Foreign Affairs Permanent Secretary Chalwe Lombe says he is alive to the issues of making those in the diaspora participate in national affairs because he has served in the Ministry as Director for some time.

Special Assistant to the President for Press and Public Relations Amos Chanda has told Journalists in Lusaka that Mr. Zulu will help start a new Zambian mission in Australia.

And Mr. Zulu has told Journalists that he will serve the Country diligently.-ZNBC