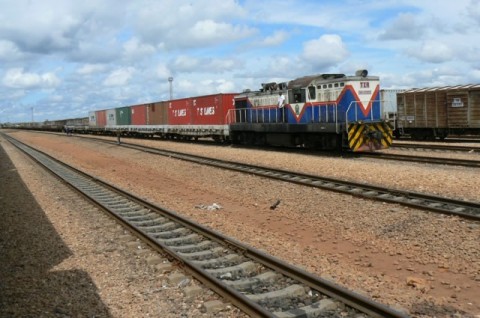 ZAMBIA and Angola have signed two bilateral agreements on water and railway transport which will facilitate the movement of people and goods and boost trade between the two countries.
And President Lungu yesterday joined his Angolan and Democratic Republic of Congo counterparts José Eduardo dos Santos and Joseph Kabila in commissioning the US$1.9 billion refurbished Benguela railway in Luau, eastern Moxico province of Angola.
The agreements were signed here on Friday by Minister of Foreign Affairs Harry Kalaba and Angolan Minister of Transport Augusto da Silva Tomas at a ceremony held at the presidential palace.
The agreement on water transport is envisaged to facilitate the movement of water vessels between Zambia and Angola at points where the two countries share waterways.
This agreement is hoped to operationalise the development of the Shangombo-Rivungu canal, a 10 km waterway which links western Zambia to the south-eastern part of Angola.
So far, construction works on the canal have reached an advanced stage as construction of facilities such as landing bays is almost complete.
Zambia has set aside over K1.7 million for the construction of 10 staff houses which will commence soon.
When constructed, the canal will open up the rural parts of Zambia and Angola to promote the movement of goods and people thereby improving the general well-being of the citizens of the two countries.
And the aim of the railway transport agreement is to facilitate transportation of goods and people between the two countries.
The railway line which will be constructed under this agreement will further facilitate connectivity between Bengwela railway line and the 600 km North-Western Railways of Zambia to be built from Chingola, Solwezi, Lumwana up to Mwinilunga-Jimbe.
The construction of the railway line which starts before June, will be launched by President Lungu.
The railway line will connect Zambia to the port of Lobito on the western part of Africa.
This connectivity is important because it will ease importation and exportation of goods to and from Europe as well as importation of oil from Angola, which is constructing an oil refinery company which will be completed over the next one year.
The setting up of a refinery company by Angola will benefit Zambia, especially North-Western and Copperbelt provinces.
The railway line to be built under the railway transport agreement will make Zambia a transit country as it will link the western coast of Africa to the continent’s eastern coast through Benguela railway line which will feed into North-Western Railways of Zambia.
The railway construction project is estimated to cost about US$1 billion between Jimbe and Chingola. About 45 percent of the resources have already been mobilised by the private sector.
Meanwhile, President Lungu and his Angolan counterparts José Eduardo dos Santos and Democratic Republic of Congo Joseph Kabila commissioned the Benguela railway in easthern Angola.
And speaking before departure for Lusaka, President Lungu said the challenge now lies with Zambia and the region to integrate into the Angola Railway network.
Mr Lungu said the Benguela Railway is shortest route to the port and can help boost trade in the region. He said Zambia will tap into the railway network to boost trade.
President Lungu has since returned in the country after his two-day visit to Angola where he was invited by that country’s President.
He was welcomed by Vice-President Inonge Wina, Secretary to the Cabinet Roland Msiska and other senior government officials.