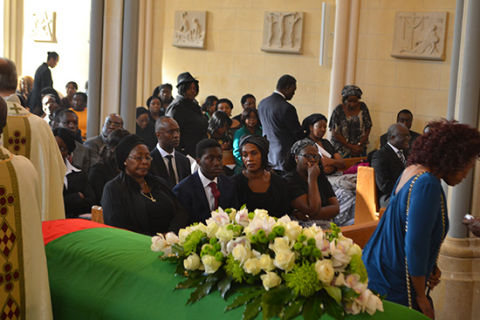 The Zambia High Commission in London has announced that the programme for the repatriation of the remains of the beloved departed President Michael Chilufya Sata has been completed in readiness for the departure of the family and officials to Lusaka this evening, October, 31st, 2014.

The Mission in conjunction with the Diocese of Westminster in London has organised a Requiem Mass in honour of the life of the late President which will take place at 12: 00 hours at the Church of Our Lady in St. Johns Wood situate at 54 Lodge Road in North-West London at 12.00 hours.

Bishop Nicholas Hudson of the Westminster Diocese will preside over the memorial and the Concelebrant will be Father Clement Mukuka, the Zambian Chaplain.

Finance Minister Alexander Chikwanda will address the congregants on behalf of government and the President Sata’s family.

And Her Majesty, The Queen has ordered a special send-off ceremony in honour of the President Sata at Heathrow Airport tonight.

The Lord Lieutenant from Buckingham Palace will represent the Royal Family and the ceremony that will be conducted by the British armed forces.

Meanwhile the Zambian Mission in London has emphasised that it is not true that it has purchased 200 tickets to offer any Zambians willing to travel to Zambia.

Press Secretary at the Zambian mission in London Amos Chanda says the statement circulating on social media and attributed to the Mission is a forgery.