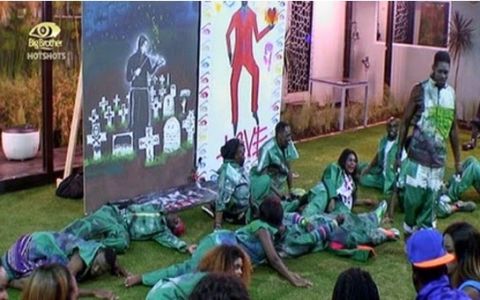 The Hotshots were on the ball when they confidently assured Biggie that they would win their second task for the wager. And they did it again and won their second 100% wager in the house. When Biggie announced that they had won, the housemates jumped up in absolute excitement and screamed all their excitement out!

This week’s presentation theme was Modern Dance Battle Week and housemates were given an opportunity to try out the new technical style. They were split into two teams in which they had to create a battle routine, the backdrop of their presentation and as well personalise their wardrobe. Big brother also helped the housemates by inviting guests to teach them the basics of the dance style.

Housemates once again wagered 100% of their weekly budget, showing off confidence in themselves. Biggie was clearly impressed by what the housemates presented and gave them a win of their second wager task since entering his house. Soon after the jumps of jubilation, the housemates raced to the storeroom to get their “little something” from Biggie. Bottles of champagne were soon popped open and glasses were filled.

With no music, Tayo settled on the drums and got his fellow housemates dancing away to his beat. The housemates were very happy as their dancing continued despite their unanswered pleas to Biggie to play them some of their favourite dance tunes. Biggie has once again given the Hotshots another great evening as they screamed “Hotshots! Hotshots! Hotshots!”