By TEDDY KUYELAMMD deputy national secretary Chembe Nyangu says the party will re-adopt its members of Parliament (MPs) whose elections were nullified on account of electoral malpractices.

Mr Nyangu said all the former MMD MPs will be allowed to re-contest their seats because they are still members of the party.He said in Lusaka yesterday that according to the party policy, the former MPs are allowed to re-contest their seats because their tenure of office is up to 2016.“The status quo at the moment is that we will re-adopt our former MPs because they are eligible to re-contest their seats.“These former MPs were just inconvenienced by what had happened and as a listening party, we will allow them to once again re-contest their seats,” Mr Nyangu said.He said even former Solwezi Central MP Lucky Mulusa and Petauke Central MP Dora Siliya are still members of the MMD despite facing disciplinary action.Mr Nyangu said the party will re-adopt the two candidates because they are fully paid-up members of the party.He said the party is happy that the court ruling has been made in accordance with the Constitution of Zambia as well as the electoral code of conduct.Mr Nyangu said the rule of law has prevailed over the Petauke Central, Solwezi Central, Vubwi, Kasenengwa, Mulobezi, Malambo, Zambezi and Solwezi parliamentary elections which were nullified.He said the MMD is happy that it has been vindicated.Meanwhile, Vubwi MP Eustarkio Kazonga said the Supreme Court interpreted the law ‘accordingly’.“I am very happy with the outcome of the judgment and this has given hope to the people of Zambia that the Judiciary is independent.“I belong to the MMD and if the party re-adopts me, I will re-contest the Vubwi seat,” Dr Kazonga said.He said if he is re-adopted, he will work hard to win the seat.On Thursday, the Supreme Court ruled that opposition MPs whose election was nullified on account of electoral malpractices can re-contest their seats.This is in a case in which the Patriotic Front (PF) had applied to bar some opposition MPs whose election was nullified on account of electoral malpractices.Delivering the verdict, Judge Gregory Phiri and Judge Marvin Mwanamwambwa, who read the judgment on behalf of the bench, said all the MPs whose election was nullified were free to re-contest their seats because the application by the PF lacked merit and was misconceived.This means all the former MPs for Solwezi Central (Lucky Mulusa), Petauke Central (Dora Siliya), Mulobezi (Hastings Sililo), Kasenengwa (Victoria Kalima), Vubwi (Eustarkio Kazonga), Mkushi South (Sydney Chisanga), Zambezi West (Charles Kakoma) and Malambo (Maxwell Mwale) are free to vie for their seats. 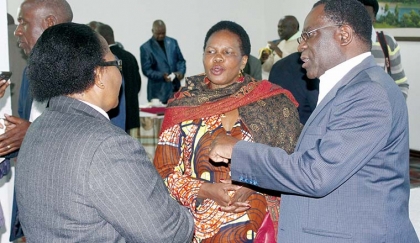