By  ALEX NJOVUKONKOLA Copper Mines (KCM) has temporarily closed the Kitwe Trades School (KTS) due to erratic water supply.KCM public relations manager Shapi Shachinda said in a statement on Thursday that the temporary closure will enable repairs and maintenance works to be carried out during the forthcoming long holiday.

“KCM will work closely with Nkana Water and Sewerage Company to find a permanent solution and avoid major disruptions to the curriculum. The Principal of KTS will next week on Wednesday advise students on the re-opening date for the school,” he said.Mr Shachinda said the mining firm regrets the inconvenience that has been caused to the students and other stakeholders.KCM spent $2.6 million in 2012 to upgrade KTS and reposition it to train more artisans in order to help plug a skills gap in the mining sector. 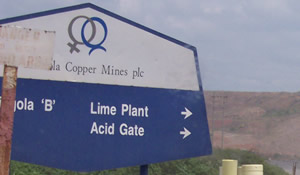