The Cause // 14+ Foundation, which builds schools in rural Africa, 14plusfoundation.org

The Cost // Around $3,000 each, including flights from New York, meals and transportation

DARLENE AND Lizzy Okpo grew up in New York, but they learned how to haggle in Africa.

The sisters, Brooklyn-based fashion designers, are the children of Nigerian immigrants; they acquired their bargaining chops on childhood trips to Nigeria. The first rule: Keep quiet, so as not to reveal your American accent. (Shake head at price. Smile.) Then, turn on the charm and don’t budge on your offer.

Those skills came in handy last year, when the Okpos spent two weeks helping to build a much-needed school in rural Zambia. Their responsibilities included looking after dozens of children, managing logistics and meals for volunteers, and shopping for supplies for the kids. “We brought it down to their price. Not Zambian prices—wholesale price,” said Lizzy, 24.

The Okpos were volunteering with the New York-based 14+ Foundation, whose mission is to build schools and orphanages in rural Africa. Roughly 60% of Zambians live in poverty, according to Unicef. While primary-school enrollment rates are high—about 96% for boys and 98% for girls, according to a recent country survey—about half of students eventually drop out.

The foundation’s first major project: creating Chipakata Children’s Academy in Chipakata Village, a cluster of modest brick houses about 100 miles east of Zambia’s capital, Lusaka. The complex will include a school, orphanage, teachers’ housing and community space, and will serve hundreds of children who now walk 9 miles round-trip to grade school, according to the foundation.

Darlene, 27, had worked with after-school programs in New York, and expected to be entertaining a group of raucous youngsters. She was overwhelmed when more than 100 children greeted her near the village store—but not for long. “I have never seen a group of kids so quiet before,” she said. The children spoke Nyanja, so the sisters led activities that required little explanation, like drawing and beading. 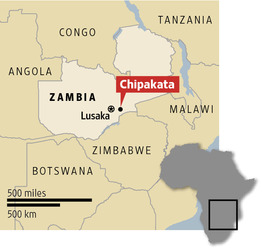 The Okpos stayed at the modern Radisson Blu hotel in Lusaka, then in Waterfalls, a basic hotel just outside of the city. Many mornings, when the volunteers rolled into the village, the children formed a perfect circle. At the urging of their mothers, they began to sing and dance, doing hip wiggles that radiated down through their legs.

Meals in Chipakata were simple; locals normally eat nshima, a cornmeal dish served with vegetables or meat. Volunteers ate a lot of sandwiches, but fried grasshoppers were served at the Blu. “For some reason, the way they put it on the plate looked amazing,” said Lizzy, who passed anyway.

The Okpos visited a nightclub one night, hoping to find design inspiration in local club wear. “The girls were dressed up like Kim Kardashian, ” Lizzy said. Still, they were thrilled when an older man busted out Bill Cosby -style dance moves.

The Okpo’s “stop everything” moment came one morning, when their volunteer-packed van stopped to pick up two girls, Naomi, 8, and Beauty, 13, who had been abandoned by their families. As they bumped down the dirt road, Beauty commandeered an iPad. Within minutes, she had mastered iTunes and was playing a cheerful song, “Chupee,” by French band Cocoon, over and over again.

“I…started tearing up in the back,” Lizzy said. “I just wanted to stop everything I was doing and just say, ‘No, I want to change her life.’ ”

The Okpos have adopted Naomi and Beauty as a personal cause. To raise money to send the girls to boarding school, they have held fundraisers in New York. A capsule collection for their brand, William Okpo, also benefits the foundation.

“You really learn to humble yourself and appreciate your surroundings and where you are,” Darlene said, of the trip. “I’ve been working with kids a long time, but there were times I would just cry.”