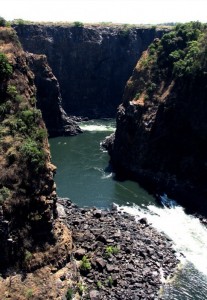 The chairperson of the Board of Directors of Zambezi River Authority (ZRA) Partson Mbiriri has said works on the public tender process for the construction of the Batoka hydro-electricity project are progressing well.

Mr. Mbiriri said the results of the fresh visibility studies are expected to be submitted at the end of 2014.

“Those are important documents going forward in terms of now engaging potential contractors,” he stated.

ZANIS reports from France that the Mr. Mbiriri was speaking in an interview yesterday with the journalists from Zambia and Zimbabwe.

He added that the authority has already done the tendering process in terms of writing for expression of interest.

According to Mr. Mbiriri, 25 companies applied for the tender process and only about nine (9) were shortlisted.

Mr. Mbiriri observed that the Batoka hydro-electricity scheme is expected to supply cheap power such as that of the Kariba dam project.

‘’It is like recycling cubic metres of water,” Mr. Mbiriri said.

The ZRA Board of Directors Chairperson has also disclosed that the construction of access roads in the Batoka project site from both sides which is facilitating the visibility studies has been developed.

“All the processes towards developing Batoka hydro-electricity scheme are underway,’’ he said.

The two governments of Zambia and Zimbabwe are in contact with their ministries of Energy and Finance in ensuring that the project of the Batoka hydro-electricity scheme is successfully implemented.

The construction of the Batoka hydro-electricity Scheme came about because of the high demand in the supply of power from within the region.

Apart from operating and maintaining the Kariba dam, the Zambezi River Authority also has a mandate of developing new hydro-electricity schemes on the Zambezi river, a development which is carried out on behalf of the governments of Zambia and Zimbabwe.

And according to its strategic objectives of 2010-2014, the Zambezi River Authority will undertake dam maintenance and develop the Batoka hydro-electricity scheme.

Meanwhile, Zambia’s Mines, Energy and Water Development permanent secretary Charity Mwansa, who is also the Zambezi River Authority Board of Directors co-chairperson, describes the Kariba dam as a strategic asset between Zambia and Zimbabwe.

The Kariba dam supplies about 40 per cent of electricity to the region.

And the ZRA Board of Directors delegation has left France for Venice in Italy.

While in France, the delegation attended presentations on the study tour of the Bimont dam and the Malpasset ruins dam and visited the dams and the Verdon gorges.