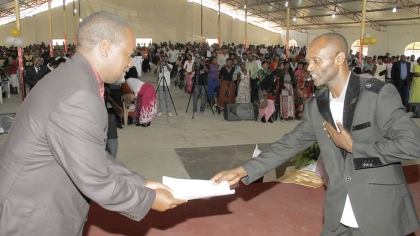 MATERO member of Parliament Miles Sampa says Zambia is a lucky country because President Sata is passionate about helping improve the lives of poor people.

Mr Sampa, who is also deputy minister of Commerce, Trade and Industry, said President Sata wants to significantly reduce poverty levels amongst Zambians.
“President Sata wants us to help the poor and the Patriotic Front Government will ensure that it reaches all parts of this country where there are poor people because we have done the roads,” he said.
Mr Sampa was speaking in Lusaka yesterday when he officiated at Miracle Impact Ministries International where the church was donating 300 bags of mealie-meal to vulnerable families.
The minister said government is ready to partner with any church in reducing poverty.
He said the paramount objective of the PF is to reduce poverty.
“I am very much touched by your gesture to help poor widows. This is what the Church ought to do and not to engage itself in politics. Leave politics to politicians or just join politics outrightly so that we face you in 2016,” Mr Sampa said.
He said some clergymen are using the pulpit to advance their political agenda.
“The constitution is important but not more than food because our poor people will not eat the constitution,” Mr Sampa said.
Meanwhile, Miracle Impact Ministries International Church overseer John Nundwe said people must be patient with the government over the constitution and appealed to pastors not to peddle politics under the guise of debating the constitution.
“Let Sata rule peacefully. I love the PF and I pray for this country daily,” Bishop Nundwe, who is fondly known as ‘John General’, said amid ululations from the congregants.
Bishop Nundwe also predicted that President Sata will win the 2016 presidential elections.
“Michael Sata and the PF will overcome in 2016. Whether you believe it or not God has shown me,” he said. ZAMBIA DAILY MAIL