In a recent article entitled “Kabimba Advises PF Members, Officials to Avoid Violence,” which appeared in The Post Newspaper of 28th April 2014, Comrade Wynter Kabimba is quoted as having advised Patriotic Front (PF) members and leaders to avoid violence because the country “can go into flames if violence becomes part of our political culture.”

This is fundamentally true. However, it is also intuitively true that violence is actually already an ingrained part of our beloved country’s political culture, and it is likely to destroy our country only if we fail to make a resolute attempt to address the situation.

Since our country’s political independence in October 1964, politically motivated violence has apparently become a major feature in both inter-party and intra-party politics.

This has been occasioned by several factors, including the tendency by some politicians and/or their supporters to consider dissent and criticism as insults, and a tendency to consider other citizens who have dissenting political views, and those who belong to other political parties, as “enemies” rather than “patriots” who also have a genuine interest in the future of our beloved country.

The incidence of intra-party and inter-party violence has also been exacerbated by intolerance, lack of respect for the rule of law, and an inability, on the part of perpetrators, to reach compromises with people who have dissenting views.

Also, the tendency by some wicked politicians to demonize and/or stigmatize political opponents has tended to incite political supporters against those who are labeled as political malcontents.

Besides, the fact that political cadres are readily available to be used by their leaders to engage in violence on a regular basis in exchange for booze, a bag of corn meal, or a few pieces of silver attests to the unprecedented lack of decent means of earning a living.

Consequently, political hooliganism has become entrenched in our country’s nascent political system, and it is likely to continue to haunt us in perpetuity unless we start thinking of ourselves as being part and parcel of the Zambian family – a family whose members have similar needs, dreams, and aspirations, and a family whose members have profound and enduring love for their country!

In fact, we are all affected by the socio-economic problems currently facing our beloved country.

Moreover, we wish for lower water charges and electricity tariffs, greater participation by women in national affairs, greater care for children and the handicapped, sustained protection of the fragile natural environment, preservation of our cultural values and traditions, a genuine effort to address the scourge of corruption, and, among other things, a system of justice that is free and impartial in both word and deed.

We should, therefore, not allow politics to create divisions amongst us to the extent of battering each other during campaigns and whenever we have differences in opinion over intra-party politics, inter-party politics, and/or a particular national issue.

And we should always remember that the real enemies of our beloved country today are not any given individuals or groups of individuals; and they are certainly not any given political parties, foreign countries, non-governmental organizations, or a particular political or economic ideology. 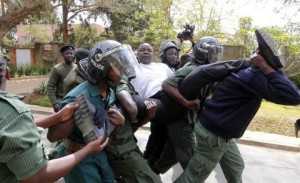 As such, we need to put our political alignments, ethnic identities, religious convictions, and professional affiliations aside and earnestly seek to promote and propagate our political views in a manner that honors and acknowledges other citizens’ constitutionally guaranteed right to participate in the political process.

Political leaders have an enormous role to play in this endeavor; in the pursuit of their political ambitions, for example, they need to walk the walk in exhibiting a high level of tact and utmost respect in their dealings with political opponents and other members of society.

They also need to make an earnest effort to discern and address the factors which agitate political cadres to engage in politically motivated violence, some of which are cited above.
The author, Henry Kyambalesa, is a Zambian academic currently living in the City and County of Denver in the State of Colorado, USA.