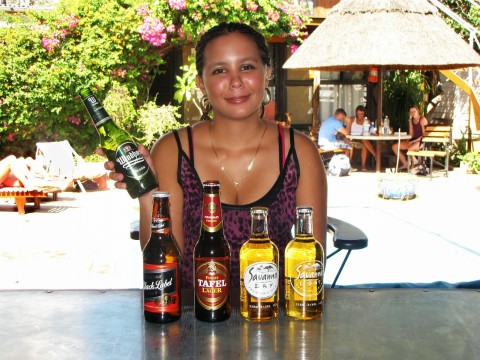 Citing data compiled by the World Health Organisation (WHO), The Washington Post says Zambia and South Africa, which both sit at the top, have 41.2% women who binge drink, while Burkina Faso with 36.8% and Mozambique with 32.9% are ranked third and fourth respectively. Nigeria takes up the fifth spot with 24.7%.

The Washington Post also says binge drinking plays a part in world events. The paper uses Britain, as an example, where cases of violence fell by about 12% (or 235 000) over the past year because of booze or lack of it.

Though the decrease mirrors trends across the Western world, the paper says tough economic times have meant fewer pints.

“Binge drinking has become less frequent, and the proportion of youth who don’t drink alcohol at all has risen sharply,” explained lead researcher Jonathan Shepherd. “For people most prone to involvement in violence … falls in disposable income are probably an important factor.”

Findings involving alcohol are one of the few things that are translatable across the world. Alcohol — with the clear exception of some Muslim countries — spans class, culture and profession. But between every country, there are differences. And there are surprises.

For instance, according to data compiled by the WHO, no nation has harder-drinking women than Zambia, where 41% binge drink at least once a week. In the United States, only three percent of women on average do the same. But, as you can see from the chart, Zambia isn’t the only country that’s deep in its cups. 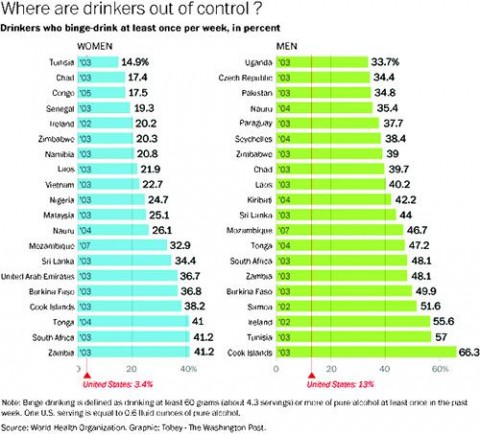 • Living on an island appears to exacerbate one’s tendency to drink. The Cook Islands, Samoa, Ireland and Sri Lanka are all near the top.

• If you are Zambian, you are probably drunk at least once per week – and in very good company.

• Pakistan, despite the fact that it is a Muslim country, has a pretty sizable drinking problem. The penalty if you are caught is 80 lashes, but the punishment is rarely enforced, and alcohol addiction clinics are flourishing.

• Who knew European countries were so safe about their booze?

• The WHO found in 2011 that the people of Moldova are the hardest drinkers in the world.

They drink three times the global average, putting back 18 litres of pure alcohol per year.

• The “riskiest” drinkers in the world are found in Russia and Ukraine.

• In Denmark, there’s something called hygge — an idea of warmth in a climate that has little of it. And yes, wine comes into play.

• Alcohol is mostly banned in Yemen, but if it is to be found, the WHO says it is going to be beer.

• Haitians almost exclusively drink spirits. Evidently, WHO researchers never heard of the Haitian beer, Prestige. It is kind of a big deal in the Caribbean nation.

• When you are measuring the amount you drink in gallons, you know you are in trouble.

• Though Mali is predominantly Muslim, alcohol isn’t prohibited. Our Africa says the drink of choice is millet beer, which looks to be consumed in large quantities.

• Portuguese women apparently give a lot of conflicting accounts of how often they drink. According to this 2008 Wall Street Journal article, 72% of women in Portugal say they don’t drink.