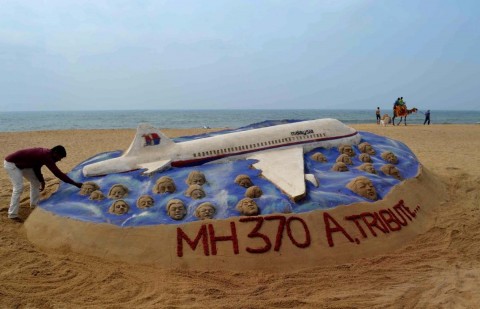 When President Barack Obama becomes the first American leader to visit Malaysia in decades, he’ll arrive in a country grappling with the mystery of a vanished jetliner.

Obama lands in Kuala Lumpur on Saturday, seven weeks to the day Malaysia Airlines Flight 370 disappeared with 239 people aboard.

He’s remained largely quiet over the issue amid an international underwater search focusing on the southern Indian Ocean.

A day before his arrival, he told a Malaysian newspaper, The Star, that the U.S. remains committed to the search.

“The United States was one of the first countries to join in the search for the missing plane,” he said.

“U.S. Navy ships, aircraft and personnel remain on the scene, assisting in the search. Our FBI is working closely with Malaysia on the investigation into what caused the aircraft to disappear. And we’ll continue to offer our support and assistance as the search and investigation continue.”

Obama’s visit comes as the initial search by the Bluefin-21 nears its end.

The submersible, which is on contract to the U.S. Navy, is scouring the ocean floor for traces of the plane.

Previously, another device, a “towed pinger locator” detected signals that officials believed were from its flight recorders, which determined the current search area for the Bluefin.

The underwater sonar device plunged into the Indian Ocean on Saturday, kicking off its 14th mission.

It has slowly scoured 95% of the ocean floor that searchers had narrowed down for it. So far, it has found no trace of the missing jetliner.

If the Bluefin-21 searches 100% of the area with nothing to show for it, the underwater search may expand Australian officials said…….