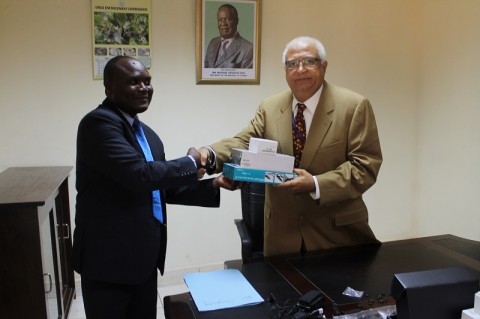 Mr Vlahakis, who officially handed over today, thanked government for the opportunity given to him to serve the Authority in the interim capacity.

“I enjoyed the experience and challenges of working for ZAWA. I would especially like to thank the officers in the field for their kindness and commitment towards the conservation of Zambia’s wildlife estate,” Mr Vlahakis’ letter reads in party.

Mr Vlahakis urged all members of staff at ZAWA to keep up the spirit and morale and that he looks forward to seeing them again when he visits the national parks in his private capacity.

He stated that the role of ZAWA officers was to educate people about wildlife and conservation.

He assured that the conditions of service and infrastructure for field officers were receiving serious attention by Government in order to have a better ZAWA befitting all.

And Acting Director General Kampamba Kombe, who is also the Authority’s Legal Counsel, thanked Mr Vlahakis for his leadership role and the contributions he has made to the authority during his tenure of office.

Mr Kombe said Mr Vlahakis’ contributions could not be over-emphasized and would definitely help the institution and the industry as a whole to proceed towards achieving its mandate.

Recently, Minister of Tourism and Arts, Jean Kapata, dissolved the ZAWA Board.

The Minister said review of policies and legislations on wildlife is scheduled to be concluded before the end of this year.

“In line with my duties as appointing authority of the board of ZAWA, I have decided to dissolve it (board) with immediate effect and I thank the out-going board members individually and collectively for their contributions that they made to carry out the mandate of ZAWA,” she stated.

The minister said the nation will be informed at an opportune time on the composition of the new board.

Ms Kapata could, however, did not disclose the reasons for dissolving the board but promised to announce the new office bearers soon.

The out-going board, which was led by commercial farmer, Guy Robinson, was appointed by sacked Minister of Tourism and Arts Sylvia Masebo.