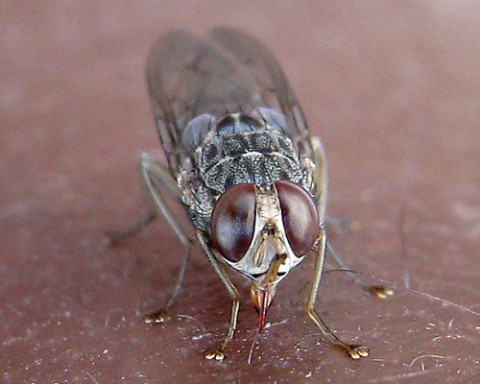 An outbreak of the deadly parasitic disease, African sleeping sickness, or African trypanosomiasis has been reported in Rufunsa District in Lusaka Province according to Member of Parliament Kenneth Chipungu.

The Times of Zambia reports eight cases had been recorded at Mupanshya Hospital. Mr Chipungu said the outbreak was due to increase in Tse-tse flies mainly in the areas that border the Game Management Areas (GMAs) owing to the constant interaction with wild animals. Chipungu also note an increase in malaria cases in the area.

Often a fatal disease with 15,000-20,000 cases reported annually, more than 60 million people are at risk in more than 30 African countries. For more infectious disease news and information, visit and “like” the Infectious Disease News Facebook page.

One of the true tropical diseases, African sleeping sickness is endemic only in sub-Sahara Africa bounded by 15° North and South latitudes. Two varieties of African sleeping sickness exist: one primarily in East Africa caused by the parasite Trypanosoma brucei rhodesiense. T.B. rhodesiense produces an acuteinfection that will usually cause severe illness and death in weeks to months.

The other species is Trypanosoma brucei gambiense. This parasite is found in West and Central Africa. However, the 2 species are showing some geographic overlap.

This infection progresses more slowly and may require months to years for disease to occur.

Both types of sleeping sickness are caused by the bite of a tse tse fly. These vicious little bugs depend on blood meals for its nutrients. It gets the blood from mammals including humans. The tse tse fly  has a very painful bite and a traveler will certainly remember getting bit.

According to the Centers for Disease Control and Prevention, treatment should be started as soon as possible and is based on the infected person’s symptoms and laboratory results.  The drug regimen depends on the infecting species and the stage of infection.  Pentamidine isethionate* and  suramin (under an investigational New Drug Protocol from the CDC Drug Service) are the drugs of choice to treat the hemolymphatic stage of West and East African Trypanosomiasis, respectively.  Melarsoprol is the drug of choice for late disease with central nervous system involvement (infections by T.b. gambiense or T. b. rhodiense).

There is no vaccine for African trypanosomes. Prevention is by preventing tse tse fly bites.