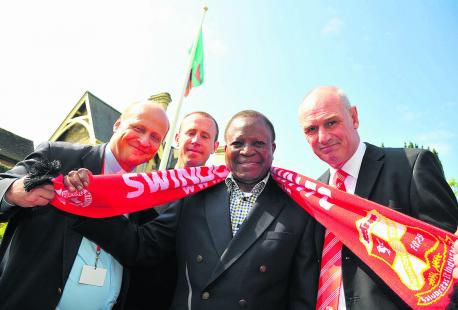 SWINDON Town Football in the Community Trust welcomed a special visit from the High Commissioner for Zambia yesterday to forge stronger links with the town.

Five visitors from the charity’s partnership with the Zambia Livingstone FA Coaching Association met representatives from STFiCT and the Zambian community in Swindon at Christ Church Community Hall in Old Town along with a special visit from the High Commissioner, Paul Lumbi, and Ikayi Mushinge, the economic counsellor.

During the afternoon Mr Lumbi met members of the Swindon Rockets Powerchair Football Club at the County Ground before attending the Swindon Town versus Bradford City match.

Clive Maguire, who is joint manager of the STFiCT with Jon Holloway, said: “One of their teams actually won the Gothia Cup in Sweden in 2005 or 2006 and we started speaking to them and that’s where the partnership began.

“We went out there a few times and it’s great now that they have come over to visit us.”

Andrew Deuchar, one of the trustees of STFCiCT, said: “I think it’s brilliant because up until now teams of people from Swindon have gone to Livingstone and done great things. To have four or five people from Livingstone now visit us here to find out what we do and what football is like in the UK is just brilliant.

“But the great thing is that it brings people in Zambia and people in Swindon together.

“We find so many things to be divisive about but whether it’s playing with a stitched ball or one that is made from newspaper and Sellotape it’s still football.

Guests heard about some of the work that had been done, and that more than 300 children in Zambia had already benefited from the partnership.

Mr Lumbi was delighted to able to find out more about the link.

He said: “I am really overwhelmed that I was asked to come and realising how established the link between Livingstone and Swindon is.

“I am a great football fan myself and for 10 years I was chairman of a second division team. It is great to hear about how the work people from Swindon are doing is helping children in Zambia develop their own football skills.”