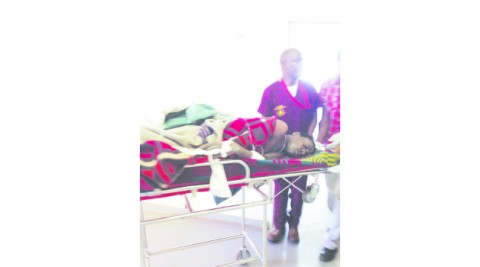 KANSANSHI Mining Plc mounted a dramatic three-hour aerial and ground rescue operation on Friday morning to save of one of the two suspected robbers who ran into the tailings dam upon being noticed by security personnel.
The two intruders are suspected to have been on a mission to enter the mine plant with the aim of staging a robbery, but alert security officers spotted them in the process and alerted authorities for reinforcement to set a dragnet.
Kansanshi Mining Plc corporate social responsibility (CSR) manager Bruce Lewis said in an interview yesterday that the mining company moved swiftly and mobilised an emergency operation which included a helicopter from United Air Charters and the company’s security wing to undertake an aerial and surface operation.
In the process, one of the suspected robbers was captured as he was stuck after sliding into deep mud in the tailings dam while his accomplice managed to escape on hard surface.
Mr Lewis said, it was due to the emergency response that the suspect’s life was saved because of the instantaneous manner in which the rescue team acted to have him resuscitated from the unconscious condition after being dislodged from the mud where he inhaled some of the tailings mud which affected his normal breathing.
He said the incident highlights the dangers of illegal entry into the mine premises by people who are unaware of the dangers they face.
He thanked the rapid response by the helicopter rescue team which consisted of pilot Tammy van Heerden, Mwila Mander and emergency response coordinator Cobus Smal and emergence response officer Charles Ngosa.- Story courtesy of SUMA SYSTEMS