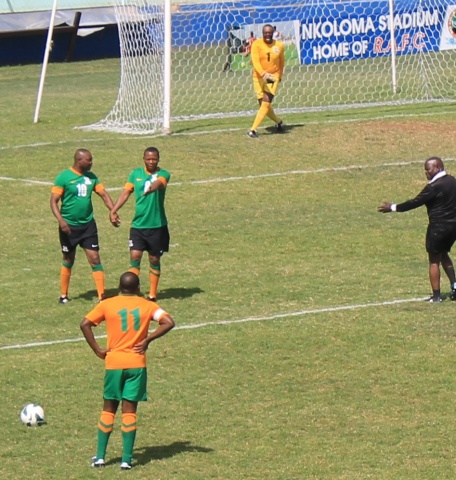 Kalusha Bwalya on Saturday scored a brace to help the KK XI rally and beat the 1994/1996 All-Stars 5-2 in a exhibition match at Nkoloma Stadium in Lusaka to celebrate first Zambian president Kenneth Kaunda’s 90th birthday.

The 1988 African Footballer of Year and current Football Association of Zambia president redeemed himself with the two goals after missing a 50th minute penalty.

Meanwhile, Power Dynamos coach and 1994 Africa Cup silver medalist Tennant Chilumba put the 1994/96 All-Stars ahead in the 28th minute when he turned in a free kick by ex-Zambia defender and now Nchanga Rangers assistant coach Elijah Tana to hand their side a 1-0 lead into the break.

The All-Stars extended their lead in the 48th minute through Moomba Ngandu after Linos Chalwe teed off the ball for him.

Five minutes later, Hector Chilombo got the KK XI’s first goal before completing his brace in the 55th minute.

Aggrey Chiyangi headed in KK XI’s third goal to put them in the lead for the first time in the match in the 69th minute.

Kalusha atoned for his missed penalty with two quick fire-goals in the 71st and 72nd minute to seal a memorable birthday present for the former Zambian president who was in attendance at Nkoloma.