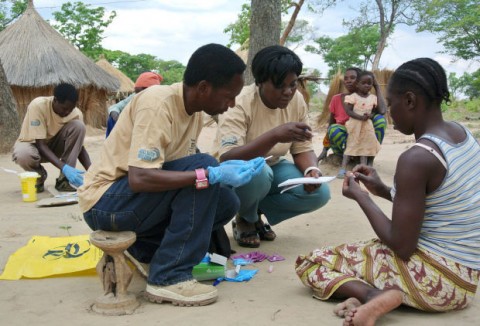 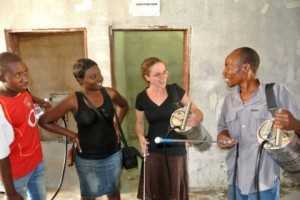 Strong emotions are evident, just below the surface. Listeners get the feeling she is reliving the story.

Callahan, 25, graduated from Cedar Falls High School in 2006 and holds a bachelor’s degree in psychology from Knox College in Galesburg, Ill. She entered the Peace Corps in July 2010. She was assigned to Mali, a landlocked country in west Africa.

After living with a Malian family for about 10 weeks to become familiar with the culture, language and complete training, Callahan began a two-year assignment as a health education extension agent in the village of Feremuna.

The village, with about 500 residents, consists of huts made of mud brick with thatch or corrugated tin roofs.

“The water situation was not good,” she said. “It is very dry there.”

There is no electricity or running water.

“It was hard to adjust to,” Callahan said.

On a typical day, Callahan — dubbed Mariam or “Mamu” by her host family — would rise about 6 a.m., at dawn. She would bathe with water from a bucket and join her host family for a meal of toh — a thick porridge made from millet, a healthy grain that grows well in the area.

Toh, which Callahan likened to polenta or mashed potatoes, was served in a large bowl with sauce — made with water, oil, bouillon and vegetables — served in a separate vessel. Family members would eat from the bowls with their hands.

However, men and women were not allowed to eat from the same bowl.

“Women are secondary citizens,” Callahan said. “You kind of get desensitized to it. You see women giving up a stool for a man, even after they’ve spent the day keeping a coal fire going and pulling water to do laundry.

“My host family was pretty good, though,” she said. “My host mother was allowed to argue with my host father, but what he said happened. He ate first, and if there was meat, he got the most meat.”

Her host father was a mason by trade but a farmer first.

“They grow their own food,” Callahan said.

As part of her job, Callahan would help the local population with basic health behavior training.

Her duties included teaching lessons at the local school, assisting midwives at the local clinic with baby weighing and vaccinations and educating expectant mothers on a variety of health-related topics.

The main language is Bambara.

“I would give a talk and the midwife would translate,” Callahan said. “But my accent got better, or they got used to it.”

Callahan told of walking with a group of women and telling them a story.

“And they understood,” she said with a grin. “That was a good day.”

In April 2012, Callahan’s time in Mali was cut short because of political unrest and a military coup.

“It was very sudden,” she said. “It was like, what just happened?”

In July 2012, Callahan was hired into the Peace Corps Response Service and stationed in Zambia in southern Africa as a community malaria surveillance officer with MACEPA, the Malaria Control and Evaluation Partnership in Africa.

There she worked with the local health department to collect real-time data, conduct mass malaria test-and-treat campaigns and train clinic workers and volunteers.

Malaria, a parasitic disease transmitted by mosquitoes that involves high fevers, shaking chills, flu-like symptoms and anemia, is one of the top three killers of children worldwide.

According to Malaria No More’s website, “every 60 seconds, a child dies from this preventable and curable disease.”

Understanding the local population is key, Callahan said. In one example, workers drove white Land Rovers into a village where white was considered the color of death. Villagers refused to be involved.

After a year of service in Zambia, Callahan returned home.

She is working as a legal assistant in a Waterloo law office and plans to pursue a master’s degree in public health.

She has been doing some speaking engagements about her Peace Corps experience and has a blog, “Living Abroad,” at elyseinmotion.blogspot.com/ that details her service.

“I’ve been given so many incredible opportunities in my life for no apparent reason, just the luck of the draw,” Callahan said. “I wanted to give back to the world.

“It’s worth it,” she said of her experience. “It will change your life forever.”