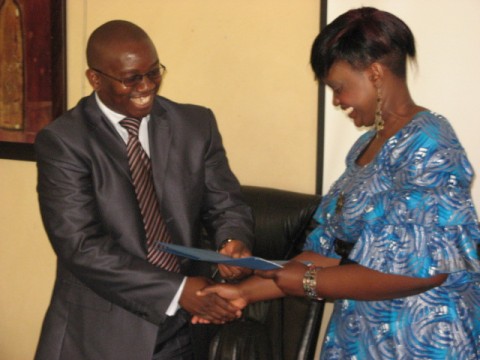 In a dramatic turn of events, PF District Chairperson Caleb Monta who on Monday warned that the party leadership will not hesitate to take disciplinary action against cadres who will be found wanting, today retracted his statement saying cadres are free accompany Mr. Sampa.

But Mr Monta who was flanked by his District Political Secretary Zebron Kashiba clarified that his statement was meant to harmonize the seemingly wrangles which have rocked the party in the district.

He was however quick to appeal to Mr. Kelvin Sampa to be informing the party whenever he is in the district to make the donations.

On Monday this week, PF district chairperson Caleb Monta warned that the party leadership will not hesitate to take disciplinary action against cadres accompanying Civil Rights Activist Kelvin Sampa during his undertakings.

Mr Monta charged that the cadres who were accompanying Mr Sampa were responsible of the accusations that the ruling party has started campaigning.

Mr. Chishoma who is also Lukulu ward councilor charged that the statement issued by the District Chairperson was damaging adding that it is unfortunate that Mr. Monta was forgetting that the said Kelvin Sampa has donated two vehicles to the party in the district.

He challenged Mr. Monta to order the party in the district to surrender the two vehicles if he wants the officials and cadres not to accompany Kelvin Sampa.