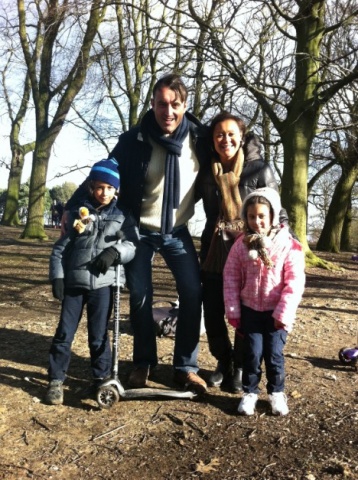 Jean Gander had travelled back to Zambia, where she grew up, to visit family. She couldn’t have known that 15 months later she would still be there.

She is still there now, trapped with her two children in a bureaucratic nightmare.

Jean, the child of a British man and a Zambian woman, was given her first British passport in 1992, when she went to the UK to study. Seven years later, she met her husband.

Frank Neumann had had a biking accident and his physiotherapist told him to attend a local gym in Kentish Town.

“We met while I was trying to exercise,” he says.

“Every cloud has a silver living and my silver lining was meeting my future wife in the gym.”

Jean was on the running machine when she first saw the Swiss commodities trader walk in.

“I saw this tall man,” she says. “I’m very tall as well so I was attracted to him and we got chatting.”

Within a few years they had moved in together, got married and had a couple of children. Jean took up a job in Harrods and the couple moved into a house in Russell Square.

Then, in January last year, she visited family in Zambia and took the kids along.

While she was there, disaster struck. Her sister was diagnosed with cancer. Jean decided to extend her stay. And then she made a second fateful decision. She went to get her passport renewed.

“My brother, who lives here, said I shouldn’t renew my passport here,” she says.

“He’d got his passport done by flying to England. But I said: ‘I’ve got nothing to hide. I’ve renewed this passport twice before in London. I might as well do it here.’ I didn’t see anything wrong. It hadn’t even expired. It was still valid for another two months.”

For some reason which was never explained, they treated the case as a stolen passport rather than a renewal. Jean was born in Zambia in 1967 and had no birth certificate, so she had to send on her baptism certificate. But the document showed her African name, Christine Chibwe Chenda. This had never been a problem in the passport office in London Victoria, where she’d previously had it renewed. But it triggered questions in Africa.

“The official confiscated it,” Jean says.

“She said: ‘This passport is the property of the Queen.’

“I could see their attitude from the very beginning.”

A priest reissued the certificate of baptism and attached an explanation but it was too late.

“They were asking for lots of kinds of proofs. They were really trying to dig into it,” Frank says.

“They treated that as Jean being a fraud. They were really asking for all kinds of details – where she went to school in Zambia, proof of her father’s British citizenship – it went on and on. We provided all the documents – documents about both parents, her dad’s passport, her mum’s passport.

Jean had to reapply to the regional office in Pretoria. They looked at it for six months.

In the mean time she had to start accepting her situation. She put her children, who had been separated from their country of birth, into a private school.

“The school fees are bad, but they have to go private school. They can’t go a normal school here. This is Africa. I have to put them somewhere they belong, with other European people.”

Then, half a year after they had reapplied, the office in Pretoria rejected her, saying they couldn’t link her to her parents. She was trapped in Zambia.

“I decided to pick it up here and get the local MP, Frank Dobson, involved,” Frank says.

“He sent a letter to the Home Office.”

Frank expected support from the British government for one of its citizens, but it wasn’t forthcoming.

“They did not help at all. They tried to do the contrary,” he says.

The Home Office asked for even more documents to be sent in.

“I had given all documentation to show she’d been living here – council tax bills, all kinds of bank statements, anything you can imagine. I provided them with it and they decided not to move.”

Next, Frank tried getting her a Swiss passport as his wife. But to do so he needed to live with her, which he couldn’t do because she was trapped in Zambia.

Now, Frank is trying to get Jean back into the UK by using his rights as a European citizen to live with his wife. Once Jean has returned, they will reapply for the passport again from there.

For now they are stranded – left without help by the British government, relying on one last legal avenue to get her back home.

“I need them as much as they need me,” Frank says.

“I fly three or four times a year to see my kids and my wife. I miss them. I miss them above anything.

“What am I going to do in the future? This can’t carry on forever. I have to consider, if the worst comes to worst, that I may have to quit my job and go live there.”

Down in Zambia, Jean is pining for Frank.

“I need my husband. My children need their father. I need my home,” she says.

“This is not my home. London is my home.”