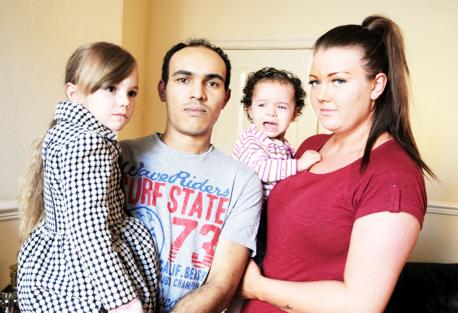 A FATHER could miss out on a dream family trip to Africa – because his passport hadn’t arrived.

Zambian-born Bernard Fennell, 30, and Danielle Macintosh, 26, were due to fly to the Zambia on Friday with daughters one-year-old Faith, and five-year-old Tegan.

Danielle, who lives with her partner and children in Aitken Street, Accrington, has never owned a passport or been on an aeroplane before, and neither have the couple’s children.

They applied for their passports as a family on March 4, using the ‘check and send’ service at the Post Office.

Danielle’s passport came within two weeks, and their children’s followed soon after, but Bernard’s had still not arrived yesterday.

Now the couple fear that Danielle will have to make the 20-hour trip – which involves changing planes – alone with their two small children.

Danielle said: “It’s causing us a lot of heartache, as we were hoping to fly all together as a family.

“I’m having to fly on my own to Africa with our two daughters alone.

“My partner is a British citizen and this matter is causing us a lot of stress.

“This is the first holiday we have ever been on and were very excited about it, but unfortunately our happiness has been shattered and after spending an obscene amount on flights this trip is turning out to be an upsetting one.

“Bernard works seven days a week and was really looking forward to teaching our eldest daughter a few things about Africa and showing her animals the Victoria Falls.”

Tyre fitter Bernard said he had had several phone calls with the Passport Office but he was unsure why his passport was delayed.

He said: “I was born in Zambia, and I was hoping to take my children back there to show them where I was born, and where their grandmother is from, and it’s all been ruined.

“We’ve been planning this trip since the beginning of the year.

“Danielle is going to have to do this all by herself, we’re going to lose all the money unless someone travels.”

A Passport Office spokesman said: “We will not issue a passport until all checks have been satisfactorily completed.

“Customers are advised not to book any travel until they have received their new passport.”