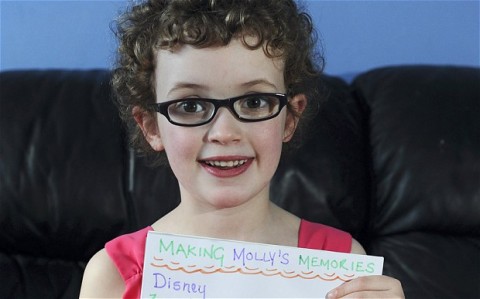 A six-year-old girl suffering from a degenerative genetic condition has compiled a ‘bucket list’ of things to see before she loses her sight.

Molly Bent, from Manchester, was born with perfect eyesight but was diagnosed with retinitis pigmentosa, a degenerative eye disease for which there is no cure, in December last year. The condition causes ‘patches’ on the retina at the back of the eye which obstruct the field of vision.

Her parents Eve and Chris began to notice their daughter struggling to read her homework or watch television when she started attending primary school.

‘‘Although my brother has the condition and several uncles have had it, I never thought Molly could have inherited it because we were always told that only boys could get it,’’ said Eve.

“When we got the diagnosis it was a big shock. We don’t know exactly when Molly will go blind but it feels as though her sight deteriorates every time we go to the opticians.

“She now can’t see out of the sides of her eyes and recently she told us that everybody standing far away looks like ‘fuzzy teddy bears.’ Molly also has night blindness, so she can hardly see in low lights and she falls over quite a lot.’’

The couple’s other children, Charlotte, 5, and Samuel, 2, have coped well with their sister’s illness: “Charlotte is brilliant with Molly on our walks to and from school. She warns Molly when there is a wheelie bin, a stick or lamp post in her way. It makes me very proud.”

However, as the condition is hereditary, Charlotte and Samuel are tested every three to six months for signs of degenerating vision: ‘‘There is still a chance that I could have three blind children and that terrifies me.’’

Molly is determined to take in as much as possible before her eyes get ‘‘too poorly.’’ The six-year-old has compiled a bucket list of things to see, which the whole family have set out to complete: ‘‘We just want to help her create as many magical memories as we possibly can.

“Molly has a list as long as her arm of things she wants to see. She wants to visit London, Australia and Egypt to see the pyramids. I know I won’t be able to give her half of that but I can try.”

After setting up a fundraising page, the family have raised over £13,000. A host of well-wishers have offered everything from words of support to a week at a cottage in Cornwall.