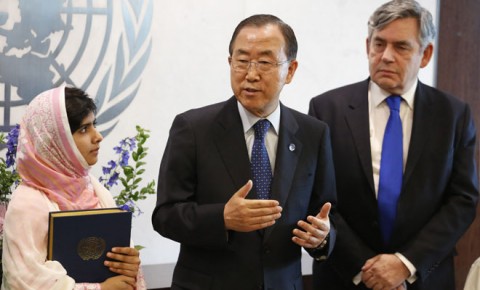 First Lady Christine Kaseba has told a global forum on social entrepreneurship in London that the Zambian government and civil society have devised partnerships that are delivering results in the provision of primary health-care to vulnerable communities.

And Dr Kaseba says government’s decision to take over the payment of salaries for health workers in church-run institutions has helped to expand healthcare to rural communities.

She said this when she Addressed the Skoll World Forum session called “The Impact Jackpot: Service Delivery Innovation for the Very Poor” at the Business School at Oxford University on Friday.

Dr Kaseba also said introduction of a pro-poor and sustainable social health insurance is helping to spread healthcare services to the poor in Zambia.

The 17 year-old activist who is an outspoken advocate of education for girls became famous after she was shot in the head on her way from school by the Taleban in Pakistan.

She says her NGO, Ubtala Bwabumi’s partnerships with traditional leaders and communities in innovations such as screening for cervical cancer and interventions in early child marriages has created positive demand for health services.

She also says Zambia has in the past few years recorded major improvements in macro-economic performance, with consistent economic growth.

This is according to a statement issued by Zambia’s acting Deputy High Commissioner to UK, Amos Chanda.