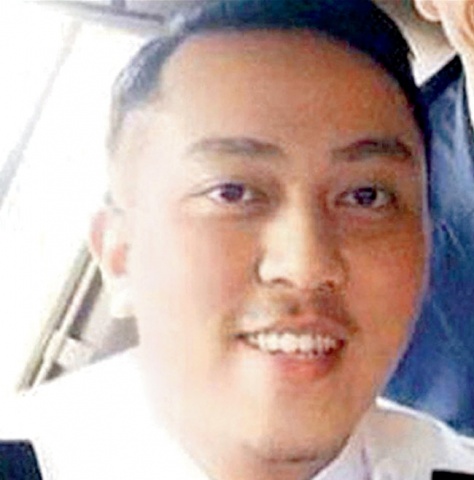 There has been no news of Malaysia Airlines Flight 370 for a long time, but this morning we learned this: the co-pilot, Fariq Abdul Hamid, tried to make a call on his cell phone after the airplane turned to the South, as it flew low near Penang:

It is understood that the aircraft with 239 people on board was flying at an altitude low enough for the nearest telecommunications tower to pick up his phone’s signal.

His call, however, ended abruptly, but not before contact was established with a telecommunications sub-station in the state.

However, the [New Straits Times] is unable to ascertain who Fariq was trying to call as sources chose not to divulge details of the investigation.

Cell phone records indicate that Fariq’s phone was turned off shortly before takeoff, as one would expect, but then was switched on again, apparently at around the time the airplane disappeared from radar.

This revelation suggests that what befell Flight 370 was not an emergency like, as some have suggested, a fire that spread to the cockpit, disabling the pilots. Presumably in the event of emergency, the pilots would have been trying to communicate on the radio, not their cell phones. The co-pilot’s attempted call suggests that someone had seized control of the airplane–either hijackers or, as is widely suspected, the pilot–and was taking it off course. Fariq at that point was evidently alive but not in control of the airplane or its radio, and was trying to let someone know what had happened.

It is too bad he didn’t succeed. While I have one friend who still thinks the airplane may be in Pakistan, it seems pretty clear that it crashed and sank in the Indian Ocean, and searchers appear to be closing in on the site. Whether any surviving evidence will tell us not only what happened to Flight 370, but why, remains to be seen.