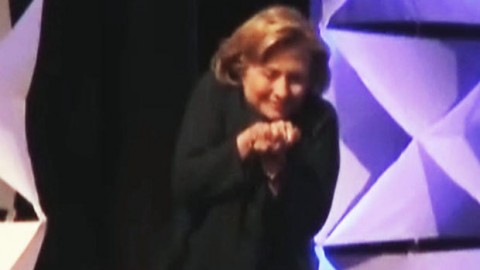 A woman was taken into federal custody Thursday after throwing a shoe at Hillary Clinton as the former secretary of state began a Las Vegas convention keynote speech.

The incident happened moments after Clinton took the stage before an Institute of Scrap Recycling Industries meeting at the Mandalay Bay resort.

The show whizzed over Clinton’s head and landed with a loud clunk. Clinton ducked, and she wasn’t struck. At first she didn’t realize what had happened.

She then joked about it.

“Is that somebody throwing something at me? Is that part of Cirque de Soleil?” Clinton quipped.

Many in the audience of more than 1,000 people in a large ballroom laughed and applauded as Clinton resumed her speech.

“My goodness, I didn’t know that solid waste management was so controversial,” Clinton said. “Thank goodness she didn’t play softball like I did.”

Brian Spellacy, U.S. Secret Service supervisory special agent in Las Vegas, said the woman was being questioned and would face criminal charges. Spellacy declined to identify the woman, and he said it wasn’t immediately clear what the charges would be.

A black and orange shoe was recovered from the stage, Spellacy said.

Ilene Rosen, the wife of a conventioneer from Denver who was seated in the second row, said she saw an orange object fly toward the stage from a side aisle and papers fluttering in the air.

Rosen said the woman had walked down the aisle to within six rows of the front of the seating area, threw the items, turned around, put her hands in the air in what seemed to be a triumphant gesture and walked toward the back of the room. Security officers quickly caught up with her.