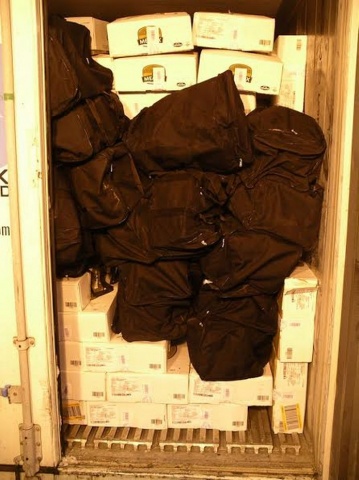 Ian Stanton, 43, was captured by National Crime Agency officers after they discovered 16 holdalls of the class A drug stashed in a consignment of Argentinean beef at Tilbury Docks.

Investigators replaced the drugs with dummy packages of bricks while the container was taken on a lorry to a cold storage unit in Wigan, Greater Manchester.

The drugs kingpin, from Liverpool, Mersey, was later caught after one of his criminal associates collected two of the bags before dumping them when he realised the drugs had been removed.

Investigators watched on as the drug lord met with gang members at Aintree Retail Park, Merseyside, where they discussed the use of physical and sexual violence against anyone who had information.

He was eventually captured at a property in Rotterdam, where several mobile phones and a drug press were recovered, before being extradited and pleading guilty to the conspiracy to supply cocaine.