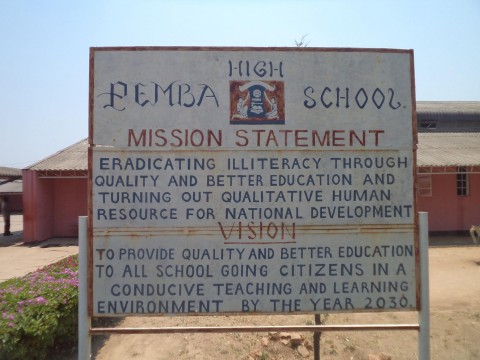 A teacher’s house at Pemba Secondary School in Pemba District of Southern province has been gutted by fire and a six-year-old child who had sustained severe burns later died in Monze Mission Hospital.
Pemba Secondary school Deputy Head teacher, Geoffrey Himwiita, Pemba District Commissioner, Reginald Mugoba and the principal Education Standards Officer (PESO) from the Ministry of Education, Peggy Chilema, who visited the scene said the inferno was caused by an electrical fault.

Mr Himwiita said the incident happened around midnight in the early hours of Friday and named the victims as Keembezi Chilumba, 37,a teacher, his wife Yvonne Kaluba and two children Anipa Kaluba, six, who has since died, and Chipo Chilumba, four.
An eye-witness, Netto Muleya, a teacher and neighbour who rescued the victims, narrated that around midnight, he heard a call for help from the neighbour’s house and quickly responded.

He said he broke the exit door of the sitting room and picked up the girl who was already crawling on the couch next to the meter box where the fire started from.

“It was around midnight when I heard a call for help and when I peeped through my window I saw that my neighbour’s house was on fire and I immediately rushed there to rescue them,” Mr Muleya said.

He said after rescuing the girl, he thought of helping the couple and a child who were also trapped in the bedroom, adding that due to the windows that were burglar barred, he thought of rescuing them from the roof but as he was climbing he noticed that the window was shaking.

“When I noticed that the window was shaking, I thought of pulling it and the couple also was pushing it outside and that is how we managed to destroy it and the couple made their way outside with the four-year old girl and I immediately rushed the girl to Monze Mission Hospital where she was immediately admitted,” he said.

And when the District Commissioner and the crew rushed to Monze hospital to see the child, they found the child had just died.

And Monze Mission Hospital acting Medical Superintendant, Ngalula Kakanda, confirmed the death of the child and described the severity of the burns as 73 per cent which he said was beyond what could be done to save her.

And Zesco Monze Branch Manager, Clement Kuyela, said he was yet to establish the cause of the electrical fault and would avail the report as soon as it was ready.

Mr Mugoba described the situation as a tragedy and unfortunate and said his office would facilitate logistics needed to mitigate the situation.