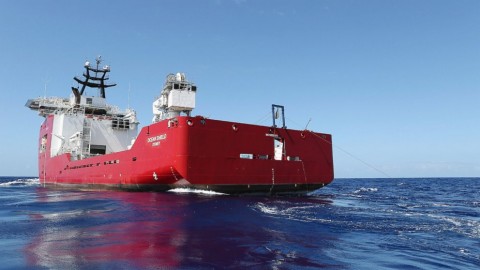 Australia officials say new signals have been detected in the southern Indian Ocean, consistent with the pings of a plane’s black box. Officials believe that the pings could be connected to missingMalaysia Airlines Flight 370, which went missing March 8 with 239 people on board.

Sound-locating equipment on board the Ocean Shield reacquired the signal on two occasions, Angus Houston, the retired Australian air chief marshal who is heading the search operation far off Australia’s west coast, said.

“I’m now optimistic that we will find the aircraft, or what is left of the aircraft, in the not-too-distant future — but we haven’t found it yet, because this is a very challenging business,” Houston said at a news conference in Perth, the hub for the search operation.

The signal was held Tuesday afternoon for 5 minutes, and later Tuesday for about 7 minutes, Houston said. Those signals allow search crews to narrow the search area into a more manageable size.

Wreckage still needs to be found in order for authorities to know for sure that this is the plane’s final resting place, Young said, but the reacquired signals mark a new turning point in the difficult search.

“I believe we are searching in the right area,” he said.

Authorities still have not deployed a submarine in the area.

Time is running out to find the plane’s “black boxes”: the flight data and cockpit voice recorders, whose locator beacons have a battery life of about a month.

Wednesday’s search includes 15 aircraft and 14 ships, covering an area of about 29,000 square miles, with the center of the search area about 1,400 miles northwest of Perth. Scattered showers are expected.

U.S. Navy Captain Mark Matthews struck a cautious but optimistic tone about the updates in an interview with ABC News.

“I’d say we’re getting more confident that we’ve found the haystack,” he said.

But Matthews said teams still need to dramatically narrow the search area before a Bluefin-21 vehicle will be deployed into the water.

“If you drew a circle around all those detections and said this are area is what we’re going to go search, that’s still weeks to months. It’s probably a month and a half to two months of effort,” he said.