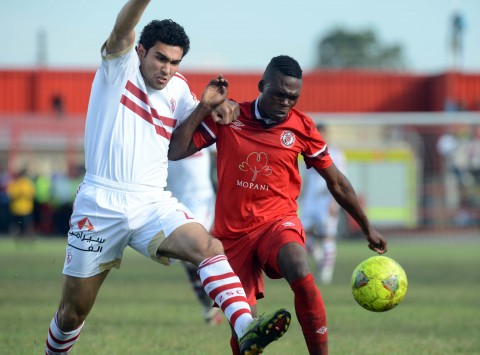 NKANA’S prize for being eliminated from the 2014 CAF Champions League is another trip to North Africa this time to face Tunisian side,  Club Athletique (CA) Bizertin in the pre-group stage of the Confederation Cup.
The Zambian envoys were on Sunday knocked out of Africa’s premier football club competition by Egyptian giants, Zamalek, who mauled Nkana 5-0 in Cairo after earlier drawing 0-0 in Kitwe.
Nkana have now been given another chance to fight for honours in CAF’s second tier club tournament.
According to the draws conducted at the CAF Headquarters in Cairo yesterday, Nkana will first host CA Bizertin, who ejected Nigerian club, Warri Wolves in the previous round, on April 19 at Nkana Stadium in Kitwe.
Maher Kanzari’s Northern Sharks, oftening referred to as CAB, will then host Kalampa at the Stade 15 October in Bizerte on the weekend of April 25-27 to determine which team goes to the lucrative group phase of the competition..
Nkana coach, Masautso Mwale welcomed the fixture against CA Bizertin, saying this was now time for redemption for the Zambian league champions.
Mwale said in an interview that Nkana needed to redeem themselves and qualify to the next stage of the 2014 Confederation Cup, whose winner was assured of $625,000 (about K4 million).
He, however, called for more hard work in the team and emphasised the need to get a positive result from the first leg at home.
“They (CA Bizertin) are a good team for them to have beaten Warri Wolves of Nigeria. But this is a different programme now (facing Nkana). It’s a chance for us to redeem ourselves. This is a good draw and we need to work hard as a team. It will be better to get a positive result at home,” Mwale said.
The 2013 Zambian Coach of the Year said Nkana learnt something from the Zamalek match and would now strive to account for themselves well in the Confederation Cup.
CA Bizertin beat Warri Wolves 2-1 on Sunday to progress to this round stage following a 0-0 draw in the first leg in Nigeria.
Yesterday’s draw also saw Zesco United’s conquerors, Medeama of Ghana being drawn against 2012 Confederation Cup champions, AC Leopards of Congo Brazzaville.
Dethroned CAF Champions League holders, Al Ahly of Egypt will face Morocco’s Difaa Hassani Jadida while South African champions, Kaizer Chiefs were handed a tough assignment against ASEC Mimosas of Ivory Coast.
Another Ivorian side, Sewe Sport, who were ejected from the Champions League by DR Congo’s TP Mazembe, will fight for a group phase slot with Bayelsa of Nigeria while Tunisian giants, Etoile du Sahel will clash with Horoya of Guinea.
Other fixtures will see Cameroon’s Coton Sport taking on Petro Atletico of Angola and Malian sides, AS Real and Djoliba facing each other.
Eight teams will qualify to the group stage where they will be divided into two pools of four each.
Each team will play six games against the other three opponents on home and away basis with the eventual two group winners meeting in the final.
With the Confederation Cup winners assured of $625,000, the runners-up will pocket $432,000 with the second and third placed teams in each group receiving $239,000 while $150,00 will be given to the fourth finishers.