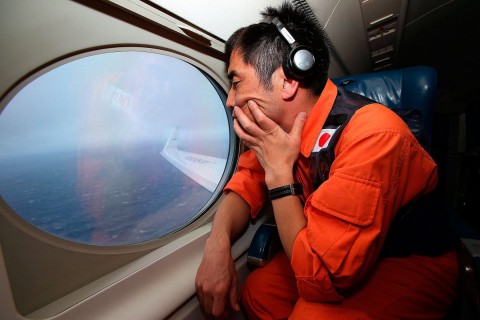 Investigators are contemplating defeat in the search for missing Malaysia Airlines Flight 370, with no plane debris found, ocean currents buffeting the search area and the black box’s battery close to running out of power

Malaysia Airlines Flight 370 disappeared on March 8 soon after departing Kuala Lumpur for Beijing, and subsequent analysis of data transmission indicates it eventually crashed somewhere in the southern Indian Ocean. All 239 passengers and crew are presumed lost to the chilly and tempestuous waters.

Khalid said the criminal investigation is still focused on four possibilities — hijacking, sabotage and psychological problems of anyone aboard the Boeing 777. More than 170 statements have been taken, and investigators plan to take even more, he said.

The inspector general of Malaysia police, Khalid Abu Bakar said Wednesday that all passengers on the flight have been cleared of any role in hijacking, sabotage, or having personal pr psychological issues that could have led to the plane’s disappearance, CNN reports.

Meanwhile, the sonar-equipped British submarine H.M.S. Tirelesshas joined the search team, which on Wednesday numbered 10 planes and nine ships. But without tracing any debris to an impact point, authorities are left to comb about 85,000 sq. miles (220,000 sq km) of ocean — roughly the size of Utah — some 930 miles (1,500 km) west of Perth, Australia.

Experts point to the 60 years it took to find H.M.A.S. Sydney and the 80 years to find the Titanic as an indication of the arduous task ahead. “And both of those are considerably bigger than the poor old 777,” Jason Middleton, an aviation professor at the University of New South Wales in Sydney, tells TIME. “The chances of finding it are very, very small.”

Even the largest possible floating objects, such as empty fuel tanks that have not ruptured or remain attached to heavy engines, have likely sunk by now. “They would almost certainly be on the bottom,” Middleton says. “Otherwise [anything floating] will be seat cushions and people’s sneakers.”

While the submarine will certainly boost search efforts, there is no telling how long it will stay in the area. If the flight recorder’s pinger battery dies before it is found — as with Air France Flight 447, whichcrashed in the Atlantic in 2009 — then searchers will have to trawl the ocean with submerged side-scan sonars looking at the ocean floor.