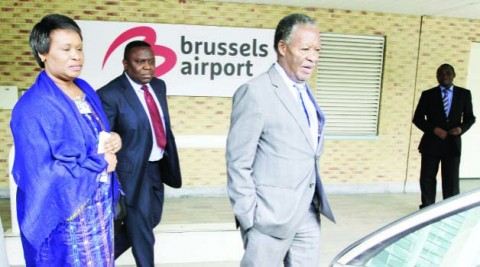 PRESIDENT Michael Sata has arrived in Brussels where he will join other African Heads of State at the fourth European Union (EU)-Africa Summit.
The fourth EU-Africa Summit will take place on Wednesday and Thursday this week and would bring together African and EU leaders under the theme ‘Investing in People, Prosperity and Peace.’
Among the issues the summit will discuss are education and training, women and youth, legal and illegal migrant flows between continents, ways to stimulate growth and create jobs. Others are investing in peace and ways to enhance EU support for Africa to manage security on the continent.
Previous summits took place in Libya in 2010, Portugal in 2007 and in Egypt.
EU-Africa relations are largely based on the Joint Africa-EU Strategy, adopted in 2007. Alongside this strategy, a 2011-2013 action plan, agreed at the last EU-Africa summit in 2010, sets out concrete targets within specific areas of cooperation, such as peace and security, democratic governance and human rights.
The President who is accompanied by Commerce, Trade and Industry Minister Bob Sichinga and his Special Assistant for Press and Public Relations George Chellah arrived at Belgium Airport at 14:30 hours yesterday.
Meanwhile, Foreign Affairs Minister Harry Kalaba said the summit was important as it would deal with issues of trade, finance, agriculture, environment, energy and justice.
Briefing the Zambian media at the Zambian Mission in Brussels before President Sata arrived; Mr Kalaba said the EU was a key partner to Africa and that the Head of State would articulate Zambia’s agenda at the summit.
Zambia’s Ambassador to Belgium, Grace Kabwe said the summit would set a stage to reassess the working relationships between the EU and Africa.
She said while here, Mr Sata would meet the President of the EU, Jose Manuel Barroso for bilateral talks at Berlaymont building tomorrow.
The president would meet with the Polish Prime Minister, Donald Tusk at Justus Lipsius Building for bilateral relations talks on Wednesday.
Mr Sata would join other heads of State at the dinner hosted by the King of Belgium, Philippe at the Royal Palace on Thursday.
Earlier on, Mr Kalaba toured the luxurious apartments which the Zambia Government repossessed from late former President Frederick Chiluba in Belsquare in the Prime area of Brussels and close to the EU headquarters.
He said there were legal issues which needed to be ironed out but that Government was determined to ensure that the property benefited the county.
“On the Belsqaure property, I was visiting it as you know it is history and I wanted to find out how well the property is being managed. I know that there are issues that the Zambian our Government has to deal with the government of Belgium,” he said.
The Task Force on corruption seized the property from Dr Chiluba.