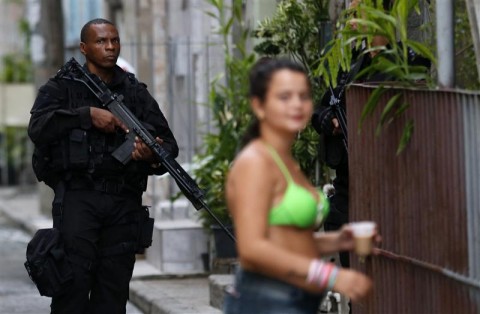 More than 1,400 police officers and Brazilian Marines rolled into a massive complex of slums near Rio de Janeiro’s international airport before dawn Sunday in the latest security push ahead of this year’s World Cup.

Not a shot was fired as the Mare complex of 15 slums became the latest impoverished area to see security forces move in to take control and try to push out heavily armed drug gangs that have ruled Rio’s shantytowns for decades.

In the coming days, Army soldiers will begin patrolling the virtually treeless, flat area of about 2 square miles (5 square kilometers) in northern Rio that hugs the main road to the airport and is home to about 130,000 people.

Security forces will eventually set up permanent posts in Mare as part of the “pacification” program that began in 2008 and is meant to secure Rio ahead of not the World Cup and also the 2016 Summer Olympics. Police have installed 37 such posts in recent years in an area covering 1.5 million people.

Sunday’s operation comes at a critical time for the security effort. In recent months, gangs have brazenly attacked police outposts in other shantytowns on orders from imprisoned gang leaders who want to stymie the spread of “pacified” slums. With each area policy occupy, gangs lose valuable territory for the manufacture and sale of drugs.

Hilda Guimares, an elderly woman who slowly shuffled down a street on her way to church in Mare as officers from Rio’s elite BOPE police unit quickly moved past, said she welcomed the presence of the state.