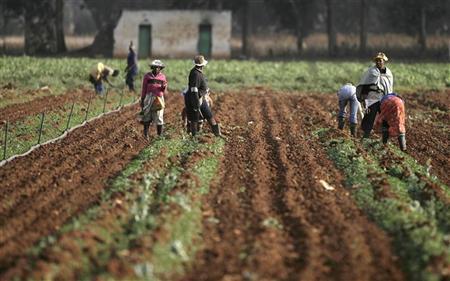 GOVERNMENT has warned that it will met out stiff punishment against unscrupulous people terrorising legitimate land owners across the country.
Home Affairs Deputy Minister Stephen Kampyongo warned people involved in demarcating farm land and selling plots to stop or face the law regardless of their political affiliation.
“As Government we have constituted a team that is looking into the matter and how to go about it because we cannot allow criminals grabbing land from people that acquired it legally,” he said.
Mr Kampyongo said his office was aware that the people trying to grab land were masquerading as Patriotic Front (PF) cadres but that his office is treating them as criminal elements.
Mr Kampyongo toured Lusaka West in the company of his Local Government and Housing counterpart Forrie Tembo and Lusaka Province Police Commissioner Lemmy Kajoba on a fact finding mission.
Recently, a farmer was attacked by suspected cadres who encroached on his land.
The suspected cadres demarcated the farm land into plots which they were selling to unsuspecting people who even started building structures.
And narrating to the two deputy ministers, the owner of the land in question Mr Siisii Lisulo said his family is living in fear as the cadres had now waged war on his family and the farm workers.
“My servant has even shifted from this place after he was threatened with death by these criminals who have waged war against us,” he said.
Mr Lisulo’s daughter Maimbolwa, has also been threatened as a result she has stopped going to school.
The family was full of praise for police officers who had been acting swiftly every time the family was under attack.
Mr Kajoba said his office has already charged some of the nine suspects that were arrested with aggravated robbery and that more arrests will follow.
“We have footage that was taken by the one of the family members which we are using to identify these criminals that we will follow wherever they might be hiding even in bars,” he said.
Mr Tembo also warned people that are fond of buying plots from unregistered entities that they risked losing their hard-earned money.
“All structures that are built on illegal land shall be destroyed according to the law. People should only build on land which is on title,” he added.
Last week, one police officer was seriously injured while a suspected cadre was shot dead during a fracas that ensured in Lusaka West when cadres fought running battles with the police after they were stopped from demarcating Lisulo’s farm in the same area. (See picture on page 3)