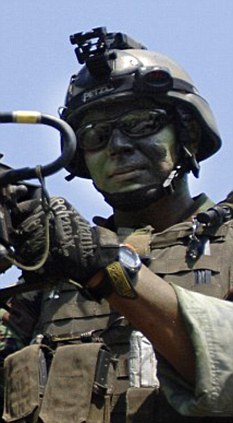 United States Navy commandos seized a diverted oil tanker in the Mediterranean waters southeast of Cyprus on Monday morning, thwarting an attempt by a breakaway Libyan militia to sell its contents on the black market, the Pentagon said. No one was hurt in the operation, the Pentagon said in a statement.

The diverted tanker, called the Morning Glory, had sailed into the Libyan port of Sidra under a North Korean flag but North Korea disavowed the ship and denied having provided any authorization. News reports have said it was operated by a company based in Alexandria, Egypt, and that after leaving Libyan waters it appeared to have sailed the Mediterranean in search of a buyer for its oil.

In a statement early Monday morning, the Pentagon said that the Libyan and Cypriot governments had requested American help in seizing control of the tanker. President Obama authorized the operation just after 10 p.m. Sunday night in Washington, the statement said. Within a few hours a Navy SEAL team on the guided missile destroyer Roosevelt boarded and took control of the tanker, “a stateless vessel seized earlier this month by three armed Libyans,” the statement said.

The Roosevelt also provided helicopter support, the statement added, but it did not say how many Americans had participated in the seizure or what force might have been used.

The American intervention is a salvation to the fragile transitional government in Tripoli, the Libyan capital, which would have faced the loss of its main source of revenue and its sole source of political power if renegade militias succeeded in selling Libya’s oil. Despite days of furious bluster, the Libyan authorities were unable to stop the tanker from arriving in the eastern port of Sidra early last week or from leaving with the oil a few days later. The loss of control over oil revenue threatened the government so gravely that the transitional government appeared to teeter, with Parliament voting to remove its prime minister without any consensus on his long-term replacement.

The seizure of the oil, which the United States Navy says it is now returning to Libya, is also a blow to the ambitions of Ibrahim Jathran, the leader of the eastern Libyan militia that sought to sell the oil. Mr. Jathran, who has presented himself as a kind of Libyan Robin Hood, has led an eight-month blockade of Libya’s main oil ports to demand more political autonomy and a bigger cut of the oil revenue for his region, which contains most of the country’s oil reserves.

But in addition to depriving the Libyan government of critical revenue, Mr. Jathran has also irked American and international concerns that have stakes in the Libyan oil industry. The willingness of the United States military to stop illicit exports appears to even out the balance of power between the government in Tripoli and Mr. Jathran’s militia in the east. While Tripoli has been unable to force Mr. Jathran to reopen the ports, he appears unable to sell the oil on his own either, returning the two sides to a stalemate.

The Pentagon said that a team of Navy sailors from the guided missile destroyer Stout would deliver the tanker to a Libyan port.