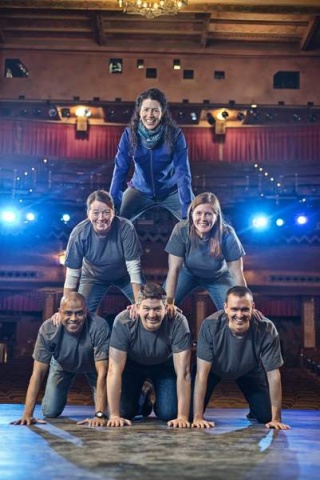 As Erica Mohr was reminiscing recently about a life-altering trip she took to Zambia, she reached for a letter on her living room table.

The letter was from Edwin, one of eight children in need Mohr is currently sponsoring through a humanitarian organization, Children International. It had arrived that day from Zambia.

“Your love for me makes things in my life bearable,” he wrote. “I pray that as we start a new year, you will be blessed.” Children who are sponsored through Children International receive health care and dental care, nutritious meals and malnutrition screenings, and basic necessities, including shoes, clothing, school uniforms and school supplies. Family assistance programs provide relief and emergency aid in times of crisis and a youth program offers leadership training and other activities to help teenagers transition into adulthood.

Mohr would soon add the letter to a file drawer already brimming with letters and photographs in her New London apartment. A U.S. Coast Guard officer, Mohr first sponsored a child 20 years ago when she was a cadet at the Coast Guard Academy in New London. Whenever the Coast Guard gives her a raise, she helps another.

In 2007, Children International asked if she could donate $1,000 to build a community center. Mohr was planning to host a charity event to benefit the center when she met another woman working on the project, Megan Miller, who wanted to help fundraise, and a motivational speaker and life coach, Karen Jacobsen, who had already raised money for Children International and traveled to Zambia. (Jacobsen is also known as “The GPS Girl” because she is the Australian voice for GPS units worldwide.)

Jacobsen said recently, “I could sense a very strong level of commitment in her and I just felt that to raise $1,000 was nowhere near big enough of a game for somebody like that to be playing.”

“She struck me as somebody who knew how to make things happen and I wanted to encourage that, and encourage her to really go for it,” Jacobsen said.

Inspired and determined, Mohr and Miller set a goal of raising $30,000 and achieved it. What is so compelling about community service, Mohr said, is that people can have so much more of an impact than they think.

“It’s usually just that inertia, right? They’re intimated. There are too many non-profits, they don’t know how to get started, they don’t know what their skills are or what could be useful, they’re afraid to do more harm than good, so they do nothing,” she said. “It just takes someone to sort of open up your eyes, so you see that it is not only possible, but really quite feasible.”

When Children International’s Hope Center – Kansas City Community Center in Lusaka, Zambia opened on June 3, 2010, the room for youth activities was named after Mohr and Miller. Mohr traveled to Zambia to see the center and meet Edwin.

“Physically standing in the other half of the world in this building that I helped create in some small way, I realized I really can have more of an impact,” she said.

Laura Heller, Mohr’s friend, went on the trip to Zambia because she sponsors children too. Most people sponsor one or two children, maybe three, Heller said. The number of children Mohr helps, and the amount of time she spends writing letters to them, Heller said, is “crazy.”

“It’s great. But it’s crazy,” she said. “I thought I gave back quite a bit until I met Erica.”

Mohr, a native of East Hampton, is a commander in the Coast Guard and the training officer at the Leadership Development Center in New London. She oversees the development and evaluation of leadership courses taught to Coast Guard members and civilians throughout the country.

Capt. Andrea Marcille, the center’s commanding officer, said Mohr is humble, so her coworkers do not know about her selfless community service unless they have asked.

“She just does it because it is her calling,” Marcille said. “She serves in the military because she is so service-focused. I think this is yet another step toward fulfilling some larger dream where she can really be selfless to a cause that speaks to her. The Coast Guard is giving her the skills and experience to do that. She has bigger things in her future, I’m convinced of it. She can go out and change the world.”

Many people do know about Mohr’s unusual hobby of asking people to get in human pyramids though, Marcille added, mostly due to the pyramid photos which decorate her office.

“She tries to get interesting people to get out of their own comfort zones and do a silly thing, which has a bigger purpose,” Marcille said, adding that leaders help others to “stretch” and imagine accomplishing, as a team, the things they thought they could not do alone.

In each photo, everyone is laughing.

“It’s this instant icebreaker and you’re creating memories,” said Mohr, who has photos of pyramids from locations all over the world.

Mohr uses her vacation time to teach English overseas. She has been to China, rural India and Zanzibar, and is planning to go to Thailand next. She helped create the Women’s Leadership Initiative through the Coast Guard Academy Alumni Association in 2012 to improve the professional development and networking opportunities for Coast Guard women.

Last year, Mohr spearheaded the effort to host a screening of the documentary “Girl Rising” at the Garde Arts Center in New London and a panel discussion with the movie’s creative director and local community leaders. Representatives from non-profit organizations spoke with moviegoers about how they could improve the quality of life and education in New London.

The film about nine girls living in the developing world is the basis for a global action campaign for girls’ education.

“It was exciting and it came from one woman who thought that our community should see how other young women in the world view education,” said Jeanne Sigel, the development and marketing director at the Garde. “She is a powerhouse.”

Mohr says her experiences overseas inform her activism at home. If she had heard about the film before going to Zambia, she said she would have looked at the website and moved on after she saw it was not showing in New London.

“I just wouldn’t have been empowered to make that happen for myself,” she said. “After having that Zambia experience, I’m like, ‘Well of course I can bring it to New London. Of course I’m going to call the Garde and make it this big community event.'”

Mohr has since asked to meet with local superintendents to discuss bringing a curriculum that is based on the movie into the schools, to empower students to try to solve the world’s challenges.

“She can get people to become connected to the community, to be involved in community service and do the things that they might not normally feel comfortable doing.”

Mohr said she hopes to help others realize the capacity they have to help.

“Not in a guilt sort of way, but in an inspiring way, like, ‘Oh, yeah, I want to make a difference in the world and I am empowered to do so,'” she said. “It doesn’t have to be Children International or Africa. It could be something very simple in New London. It could be donating books to the library. It could be mentoring a child. Whatever it is, you will probably get more than you give by accident.”

With the growth of consumerism, Mohr said she worries “we’ve lost touch a little bit with the things that make us human and make us happy.” What will bring real joy, she said, is “meeting someone new, helping someone out, being of value to someone else, feeling like you’re going to make a difference in the world, being connected to those around you.”

“When you volunteer, you are getting all of that,” she said. “It’s just so much richer.”

Jacobsen said she is confident Mohr inspires others.

“She is a woman of her word. Her follow-through, to me, is extremely inspiring,” said Jacobsen.