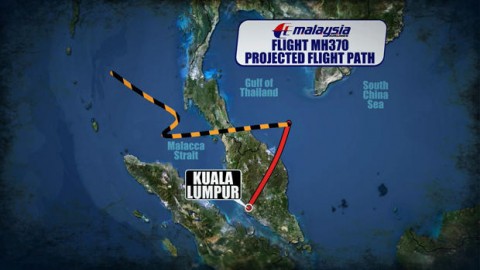 In a press conference Sunday Malaysian authorities said the number of countries involved with the search and rescue operation for Malaysia Airlines Flight 370 has increased from 14 to 25.

Authorities are checking on ground staff, crew and passengers.

Police have not received background checks on all the passengers. Police chief Inspector General Khalid Abu Bakar said they are still waiting for other countries to respond. So far nothing alarming has come from the information they have received.

Malaysian police are also examining a flight simulator belonging to one of the pilots of the missing jetliner and investigating engineers who worked on the plane, sharpening the probe into the jet’s disappearance after authorities revealed it was a deliberate act.

The government said police searched the homes of both of the plane’s pilots on Saturday, but did not say whether it was the first time officers had done so since the flight went missing more than a week ago with 239 people aboard en route to Beijing from Kuala Lumpur.

Officials revealed that the final words from the cockpit – “All right, good night” – were spoken to air traffic controllers after the plane’s data communication system had been partially disabled. The pilots did not mention any trouble on board, suggesting they may have been misleading ground control.

Asked what the significance of this was, air force Maj. Gen. Affendi Buang told reporters: “This will tell you something … because this is something not normal that the pilot would do.”

Affendi said he did not know whether it was the pilot or co-pilot who spoke to air traffic controllers. That uncertainty also opened the possibility that someone else spoke those words, though he did not mention this scenario.

Authorities were trying to narrow down the search for the plane, which satellite data shows could have kept flying as far north as Central Asia or far into the southern Indian Ocean, posing awesome challenges for efforts to recover the aircraft and flight data recorders vital to solving the mystery of what happened on board.

Satellite data has shown that after losing contact with air traffic controllers, the plane could have kept flying as far north as Kazakhstan in Central Asia or deep into the southern Indian Ocean, posing awesome challenges for efforts to recover the aircraft and flight data recorders vital to solving the mystery of what happened on board. That has left authorities desperate to narrow down a search area now stretching across 11 nations and one of the most remote oceans in the world.

Malaysia has asked for help from countries in South, Central and Southeast Asia for assistance in tracing the jet by providing satellite and radar data, the government said in a statement. It said that for now, both the northern and southern routes that the plane may have taken were being treated with “equal importance.”

There appeared to be some confusion over where to search as India, one of 12 countries contributing planes and vessels to the hunt, said it had stopped looking while waiting for confirmation from Malaysia on where to search.

Australia said it was sending one of its two AP-3C Orion aircraft involved in the search to the remote islands in the Indian Ocean at Malaysia’s request. The plane will search the north and west of the Cocos Islands, a remote Australian territory with an airstrip about 1200 kilometers (745 miles) southwest of Indonesia, military chief Gen. David Hurley said.

Malaysia’s acting transport minister tweeted that he was in meetings to decide the “next course of action.”

In the first detailed account of what happened to the plane, Prime Minister Najib Razak said Saturday that someone severed communications with the ground and deliberately diverted Flight 370 back over the Malay Peninsula early on March 8.

The revelations raised questions over possible lapses by Malaysian authorities, including why the air force wasn’t aware that a jetliner was flying over the country. It also triggered speculation over who on the plane was involved – and what motive they might have for flying away with an aircraft carrying a 12-person crew and 227 passengers.