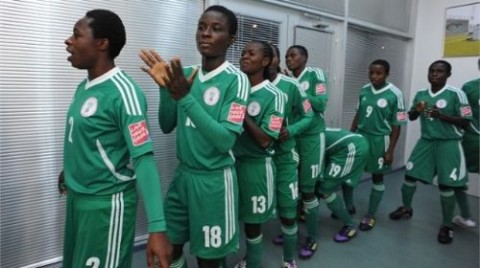 Tweet
Costa Rica “opens its wings to the world” on Saturday when the 2014 FIFA Under 17 Women World Cup kicks-off in San Jose. Africa’s representatives Ghana, Nigeria and Zambia are in contention for the championship which runs from 15th March to 4th April.
Of Africa’s trio, Ghana and Nigeria are making their fourth championships respectively while Zambia is making history with her finals tournament debut having overcome South Africa in the decisive qualifier. The Shepolopolo, despite being underdogs in Group A against hosts Costa Rica, Italy and Venezuela, fancy their chances after coming off a tough qualifying final fixture and successful training camps in Lusaka and the United States of America. The Zambians open their campaign against Italy on the 15th of March in San Jose and coach Albert Kachinga says they plan to go as far as they can.
“We have prepared very well and made history by just qualifying but we want more. We have no reason to fear any team. We are in the finals to compete and ready for any team,” Kachinga said as Shepolopolo arrived in San Jose ahead of Saturday’s opening matches which will see two of Africa’s flag-bearers – Zambia and Ghana – in action in their respective groups.
Ghana, bronze winners at Azerbaijan in 2012, have lofty ambitions in Costa Rica where they hope they can do better than last time and get to the final.
Coach Evans Adottey’s Black Maidens are beaming with confidence that they can better their last nronze medal finish and make history for Africa.
“We want to break the record we set at the last World Cup. We won bronze, but we aim to be the first African team to win gold at the World Cup,” says Maidens striker Jane Ayieyam.
Ghana face Korea DPR, Germany and Canada in Group B and open their campaign against the Koreans on 15th March in the municipality of Liberia.
Nigeria have a rich history in the tournament, having twice qualified to the last eight and at the last championship in Azerbaijan, the Flamingoes’ hopes were only dashed by the lottery of post-match penalty shoot out when they lost out on a semi-final place to France. Costa Rica presents them a good opportunity to progress further. They will have a realistic of going all the way to lift the trophy and coach Bala Nkiyu reckons that the assemblage in Costa Rica will be ready for the challenge. The Flamngoes play Mexico, Columbia and China in Group D matches.