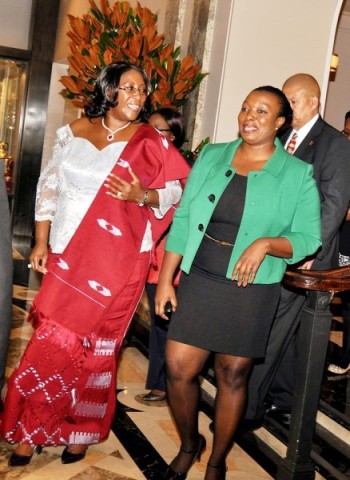 First Lady Christine Kaseba has called for concerted efforts in the fight against Gender Based Violence (GBV).

Dr. Kaseba said there is need for dialogue that will go beyond political affiliation in order to successfully fight GBV in the country.

She said victims of sexual violence are a special case that needs to be dealt with by experienced people in order to address the problem.

The First Lady said this yesterday in Chikanta Chiefdom of Kalomo District, during the launch of the pilot project on the training of traditional leaders in the fight against GBV.

Dr. Kaseba said government has realized that traditional leaders play a key role in addressing the problems of GBV.

She condemned the culture of battering spouses in order to show them love, saying they must care for their spouses through care and support.

The First Lady has since appealed to victims of GBV not to hide in shame but to speak out and report such cases to relevant authorities.

And Southern Province Minister Daniel Munkombwe said Dr. Kaseba is a special first lady who has a heart for the people in the country.

Mr. Munkombwe said the chiefdom is blessed to have received the first Lady who is committed to ensuring that rural lives are uplifted.

He expressed happiness that the chiefdom has yet again received a special visitor in the First Lady adding that within a space of three years, the chiefdom has been visited by high ranking government officials following President Michaela Sata’s visit last year and the Vice President Guy Scott in 2012.

Ms. Otienlo thanked government for making strides in the improvement of women s affairs through the creation of the Ministry of Gender and Child Development

Ms. Otieno says she is happy that Zambia is in the process of eliminating all forms of GBV, such as early marriages and abuse.

She said despite the progress made in the country a lot still needs to be done in reducing gender based violence cases.

And in a vote of thanks, Chief Chikanta said he will continue supporting the government of the day in fostering sustainable development.

The traditional leader said it is the first time his Chiefdom is conducting such a programme and said he is confident it will drastically reduce cases of GBV.