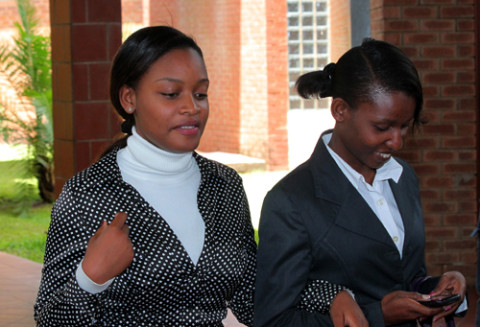 MMD vice-president Michael Kaingu has demanded justice to prevail against the man who was involved with his daughter Iris in her pornographic video which did the rounds online in 2011.
Dr Kaingu, who is also Mwandi MMD member of Parliament (MP), told a parliamentary Watchdog Committee on Legal Affairs that while he did not condone what his daughter did, he did not also support the freeing of the man who was found in the act with her.
Dr Kaingu said it was disheartening that while his daughter was dehumanised and made to pay heavily for that act, the boy she was involved with was left scot-free.
This was when Ministry of Gender Permanent Secretary Daisy Ng’ambi appeared before the committee at Parliament.
“There was a terrible report in the Press concerning Iris Kaingu, my daughter. I do not condone the misdemeanor that she was involved in but what is of concern to me is that the Ministry of Gender was quiet, when you know it takes two to tangle,” Dr Kaingu said.
He said Iris was involved with a known boy and it was sad that up to now nothing had happened to him as regards facing the law.
“When we compare and contrast, we wonder whether the Ministry of Gender has gone to sleep. Your ministry seems to be very silent on the boy,” Dr Kaingu said.
Police arrested Iris and her alleged lover “Teddy Malekani”, previously identified as “Nathan Silenga” on November 2, 2011 for appearing in obscene material.
Iris and her partner appeared in a 16-minute sexual video that had been circulated all over Zambia and was available on the internet.
Zambian laws prohibit the production and distribution of pornography. Iris, a former ZCAS student, was found guilty of producing pornographic materials by Lusaka magistrate Prince Mwinga in 2012 and was fined K10.8 million cash.
Iris was also detained several days at Lusaka Central prison, lost her career at ZCAS, suffered public ridicule, and her case had been widely publicised.