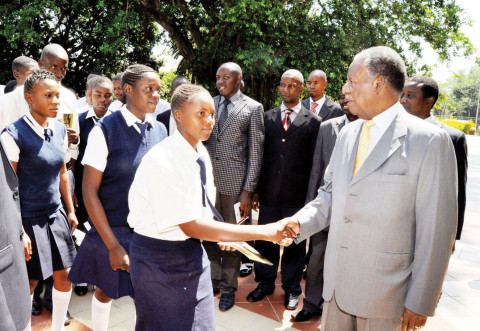 PRESIDENT Sata’s Facebook friends have continued to rise rapidly with numbers hitting over15,000 by mid-yesterday showing he continues to enjoy popularity among Zambians, especially the youth. The figure grew to 16,500 by 18:00 hours
Mr Sata opened an official Facebook account on Friday, much to the delight of regular local Facebook users, who immediately visited the page to verify its creation.
Deputy Mayor of Lusaka Mulenga Sata said the President’s decision to take advantage of social media shows he is a modern leader keeping with modern times.
“Anything that gives people an opportunity to interact and interface with the President is a welcome move,” Mr Sata said.
“It shows that as a senior citizen, he is ready to embrace modern technology to advance his vision and goals.”
Mr Sata is hopeful that Zambians will use the social media platform to communicate with the President in a civilised manner and not use the anonymity of the internet to abuse their interaction.
On Friday, the President’s first communiqué via Facebook was on the official handover of 57 low-cost houses and two churches by Minister of Transport, Works, Supply and Communication Yamfwa Mukanga.
The President joins the likes of fellow African presidents such as Paul Kagame of Rwanda, Uhuru Kenyatta of Kenya, Jakaya Kikwete of Tanzania and Malawi’s Joyce Banda, who have taken advantage of the popularity of social media to communicate with respective citizens, especially those of the younger generation.
Zambian Facebooker Lucky Cheelo’s response to the President joining Facebook was: “Welcome to social media Your Excellency, I pray your page will be as madam Joyce Banda’s Facebook page.”
Another facebooker, Humphrey Shamz, said: “Welcome to the family.”
The President’s official Facebook account is called His Excellency Michael Chilufya Sata.