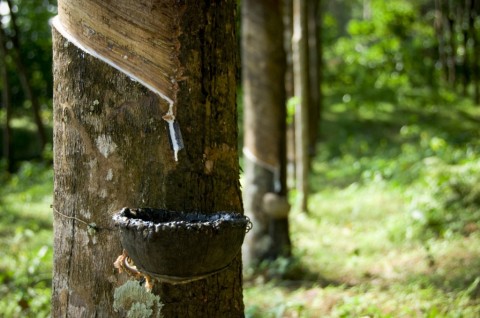 A researcher in Nchelenge District of Luapula Province says the rubber project is commercially viable and has the potential to create thousands of jobs for the local people.

Davies Simposya says the district can be self sustaining if the potential of the rubber project is exploited to the commercial levels.

Mr Simposya says the rubber in Nchelenge is comparable with other varieties from the traditional growers such as Malaysia and Malawi among others.

He, however, observes that the rubber potential in Nchelenge has not been maximized and   the plantation has remained in its infancy stages and more of a study case over two decades after it was established.

The researcher says the local interest is good and that the project has the potential to feed the district and grow the district’s economic profile once commercially exploited.

Mr Simposya said this when the visiting Director of the Decentralization Secretariat, Alfred Sakwiya, an impromptu visit to the rubber project.

He disclosed that this year his department has failed to plant over 24,000 seedlings at the nursery and that workers who helped in securing of the plantation from the bush fires last year have not been paid.

Mr Simposhya said the only hope remaining before the seedlings go to waste is how much interest could be generated from the members for the general public to collect them under the individual out grower scheme.

And Mr Sakwiya said it is shameful that people have continued wallowing in poverty in the abundance of plenty.

Mr Sakwiya said the trees can make wonders in terms of nutritional and medicinal values as well as income generation to fight poverty among the people.

He observed that Zambia is currently importing timber from Malawi when there is more land per capita, saying this does not make sense at all.

Mr Sakwiya further said the decentralization reforms are aimed at addressing these bottlenecks that have continued undermining meaningful economic growth and sustainable development.