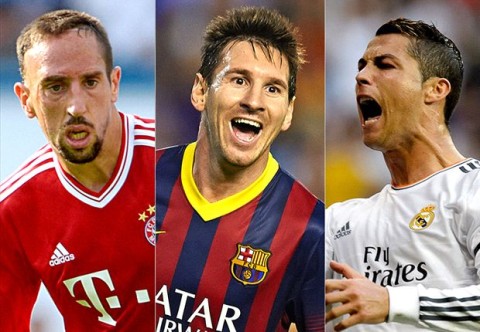 The world of football has been holding its breath for the long awaited announcement of the FIFA Ballon d’Or winner. The day has come when it will be revealed who the worlds best player of the year is. Will it be Messi again? Will Christiano Ronaldo take it this time around? or will it be a first time for Bayern  hero Franck Ribery?

Franck Ribery was arguably the most successful of the three as he guided Bayern Munich to a historic treble in 2013, only to then go on and win the European Supercup and help France qualify for next year’s World Cup.

Cristiano Ronaldo endured a rare trophyless season, but that didn’t stop the Portugal international from shining individually as he banged in the goals in all competitions, helping his country to the World Cup with a sensational hat-trick against Sweden.

Lionel Messi enjoyed yet another impressive season with Barcelona as his goals helped the Catalans to the Liga title and the Spanish Supercup. The Argentine might have missed the last few months of the year due to injury, but had a fine 2013 nonetheless.