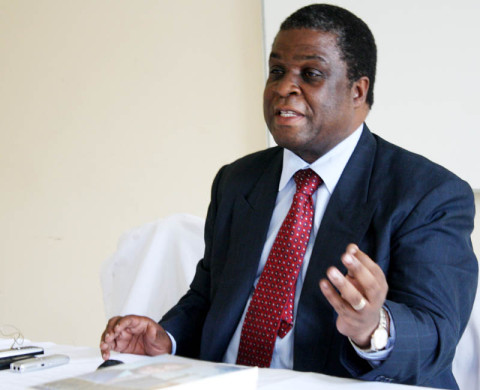 RICHARD Sakala, the managing director of the Daily Nation, and his production editor, Simon Mwanza, who are jointly charged with Foundation for Democratic Process (FODEP) executive director MacDonald Chipenzi have asked the Lusaka magistrate’s court to refer their case to the High Court for determination of constitutional matters.
This is in a matter in which Sakala, Mwanza and Chipenzi are charged with publication of false news with intent to cause fear and alarm to the public contrary to Section 67 (1) (2) of the Penal Code chapter 87 of the Laws of Zambia.
It is alleged that the three, on December 10, 2013 jointly and while acting together, did publish a false article in the Daily Nation.
But Sakala and Mwanza’s defence lawyers Martha Mushipe, Marshal Muchende and Keith Mweemba asked Magistrate Lameck Mwale to refer the matter to the High Court for interpretation.
They contended that their clients could not be charged under a “draconian, archaic and redundant law”.
Ms Mushipe said the law under which Sakala and Mwanza were charged was used by colonial masters to suppress the freedoms of Africans while the Zambian Constitution stipulates otherwise.
She said the charge was repugnant to the Constitution as it sought to criminalise the dissemination of information.
Ms Mushipe said Sakala and Mwanza could not be caused to be indicted on an article that was published by the Daily Nation as the two were neither shareholders nor directors of the organisation but were mere employees.
Mr Muchende, on the other hand, said the matter should be sent to the High Court for it to determine the section under which the two were charged.
He said if the answer would be in the affirmative, the court should further determine whether it was a suitable matter for it to strike down the provisions of Section 67 as being anachronistic and at variance with the Constitution.
Chipenzi’s lawyer, Eric Silwamba said he had just received the indictment and as such, he needed time to study it.
Mr Mwale adjourned the matter to February 6 for continued hearing of preliminary issues raised.