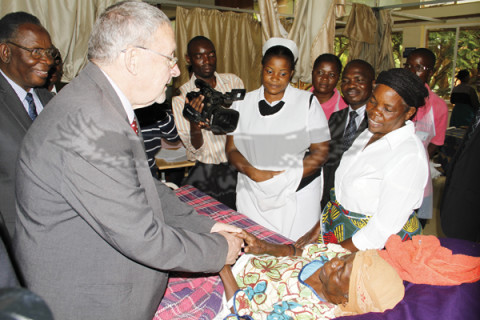 VICE-PRESIDENT Guy Scott says he is not impressed with the pace at which the Public Service Commission is attending to appeals by some dismissed nurses.
And Dr Scott has dismissed speculation in some sections of the media that he intends to resign his position next month.
The vice-president, who later interacted with patients and their relatives in wards, said this when he paid an impromptu visit to Lusaka’s University Teaching Hospital (UTH) yesterday.
Dr Scott said he would soon seek an audience with the commission so that it can expedite the hearing of appeals by some nurses.
“I am not impressed by the slow rate at which we have dealt with the appeals. I am going to have a word with the Public Service Commission to see if they can accelerate the process,” he said.
Dr Scott added: “These dismissed nurses are people who deserve to be re-employed.”
He said there is no way a hospital can operate without nurses and that government is doing a lot to improve service delivery and efficiency at UTH.
“People sometimes expect these hospitals to run like hotels. But I can assure you that even at a national hospital in Britain, where my sister was the other day, it took four hours to get a nurse.
“Standards people sometimes set are too high, and this case is picked up and used for politics and so on and so forth,” Dr Scott said.
He, however, said he is impressed with the cleanliness at the institution, which is important for patients’ recovery.
Dr Scott said UTH has generally good customer satisfaction, a good working environment and adequate drugs.
He said UTH management and the Ministry of Health are doing commendable work and should be encouraged.
“On balance, I am not as disappointed as I feared from some gossip. That is why I spend my life going round to see what is true and what is not true,” Dr Scott said.
And Dr Scott said he has no intention of resigning and advised people spreading falsehood to stop.
“They say I am resigning from Government next month, there is gossip. I have to go check whether it is true, and ask my wife, did you write a letter to say I was resigning,” he said.
And Minister of Health Joseph Kasonde said according to advice from experts, the process of hearing nurses’ appeals would be completed before the end of this week.
Dr Kasonde also said the government will upgrade six health centres in Lusaka to hospital level to reduce pressure on UTH.
He also said pilferage of drugs is a serious problem.
UTH managing director Lackson Kasonka said the hospital has received 116 newly recruited nurses in the last two weeks.
Dr Kasonka also said the Public Service Management Division will recruit more nurses and that he is hopeful that more would be sent to UTH.