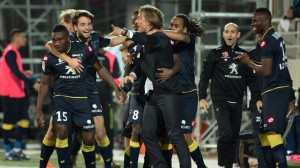 FRENCH side Sochaux coach Herve Renard says Stopilla Sunzu is one of the best defenders in Africa and is a necessary cog in ‘Operation Save Sochaux’.
And Renard says he signed Sunzu and midfielder Nathan Sinkala with his eyes closed because he knows they are quality players.
The former Chipolopolo coach said Zambia is awash with talent and that Sunzu and Sinkala stand tall among all.
He told the TP Mazembe website that he settled on Sunzu and Sinkala because of their innate abilities.
“These are two champions of Africa operating in key positions.  I consider Sunzu one of the best central defenders in Africa. Sinkala has so much quality in his footwork and I think they will succeed in Europe,” Renard said.
Sochaux are second from the bottom in the French top league and Renard believes the duo will strengthen the team in the second round of the season.
“I have no doubt about their ability to succeed.  I signed with eyes closed because I know their qualities,” he said.
Renard said apart from Sunzu and Sinkala, other players he had considered are his long-time best player, midfielder Rainford Kalaba and left-back Emmanuel Mbola.
He was not without praise for TP Mazembe owner Moses Katumbi whom he said had the plight of players at heart.
“That,” he said, “is the mark of a great president. Pass my thanks to Mazembe and all the Congolese”.