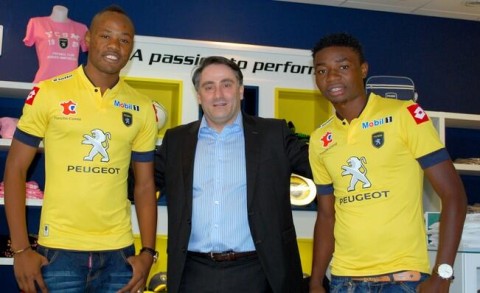 Sochaux are second from the bottom in the French top league and Renard believes the duo will strengthen the team in the second round of the season.
“I have no doubt about their ability to succeed.  I signed with eyes closed because I know their qualities,” he said.

The duo left Zambia on Monday and underwent medicals on Tuesday before agreeing terms on Wednesday.

French sports daily Lequipe reported on Friday that Sunzu has agreed a three-year move to France.

This will be Sunzu second stint in France after a brief stay with second tier club Chateauroux five years ago.

Sunzu,whose deal with Souchax is valued at 1 million euros says, “My first experience in France a year Châteauroux was unhappy because such a change of coach  but Hervé Renard knows me well and knows how to handle me and tell me to motivate me. ” We arrived [with Sinkala] to save the club from relegation. Nathan Sinkala comes ready so we strengthen the position of defensive midfielder.”

Nathan Sinkala, who will wearing jersey 28 says, “I’m here also to save the FCSM in Ligue 1! I watch French football that I find very ‘hard’ but I expect to play in Ligue 1 the way I know best. The climate of France You get used to this kind of thing.”
Souchax boss Laurent Pernet says the duo should be ready to play against Olympique Lyonnais on saturday after a training session Wednesday afternoon.

” We recruited three players in the first week of the transfer window but we must now think about reducing the workforce. There is some risk with the recruitment of two foreign players , but limited because they know Hervé Renard”, he said.

Sunzu and Sinkala join Zambian team mate Emmanuel Mayuka, who is on loan from Southampton. They make the latest African signings for Souchax together with Ghanian player Andre Ayew.