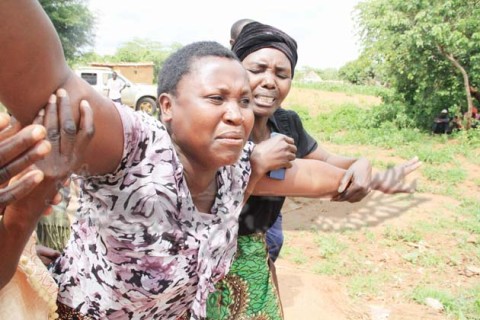 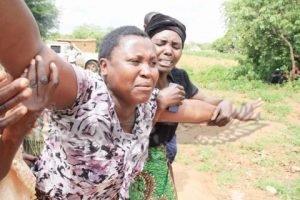 FLORENCE Sinkende, mother of seven children burnt to death by their father on New Year’s Day, had a premonition because her killer husband had warned of leaving a history which she would never forget.
Paul Phiri, aged between 45 and 50, is said to have torched the house with petrol after failing to reconcile with wife Florence, with whom he had been on separation for three years.
Ms Sinkende said as Mr Phiri was escorting her to Kulima Tower bus station to board a bus to Kalingalinga before connecting to Maamba, he extraordinarily and repeatedly expressed his glowing love for her.
She said in an interview at her aunt’s residence in Lusaka’s Kamwala on Sunday afternoon that her husband bought a lot of things that included a car phone charger, chitenge wrapper and handsets for her phone.
Ms Sinkende, who broke down from time to time during the interview, said Mr Phiri further promised to take care of the children and to weed her maize field while she would be away in Maamba.
“When I got on the bus, he came to the window side and he said, ‘my wife you have suffered enough, but one day it will be history for you, the problems you have been going through will be no more’.
“Just before the bus could start off, he said ‘you will have a history which you will never forget in your lifetime. You will always remember that such a thing can happen’,” she said.
Ms Sinkende said around 12:00 hours while she was on the  Maamba-bound bus at Downtown Shopping Complex, her husband phoned so that he could see her for the last time.
She said Mr Phiri also bought some food for her but the bus started off before he could take it to the station at Downtown.
Ms Sinkende said throughout her journey from Lusaka to Maamba, Mr Phiri made numerous phone calls to find out where she had reached.
She said her husband repeated the statement about the history he would make when she was almost in Maamba but she did not take it seriously.
Ms Sinkende said when she was suddenly driven back from Maamba to Lusaka, she sensed that there was something ‘fishy’ which her husband could have done at home and started having strange feelings.
“When we reached home, I saw police vehicles, officers, a lot of people and my house was burnt down. That was when I realised what he [her husband] meant about a history which I will never forget,” she said and broke down for minutes, prompting a female relative to come outside where the interview was being conducted to calm her down.
Ms Sinkende said she used to receive her husband well whenever he visited her to see the children because she was mindful that she could be in problems if she rejected him.
She said the night before she left for Maamba, her husband told her he wanted to travel to South Africa to get “connections” from a friend so that he could start work as a truck driver.
Ms Sinkende was opposed to the idea but instead encouraged him to continue with his retail business because he was able to fend for his children.
“He said ‘I have realised that you are the only wife I have who can look after me… so I have come so that we can live together’. Then I told him that there is no problem, just give me a bit of time,” she said.
“He said ‘you see what, it’s like I have caused you misery. When you loved me so much, I never loved you. Now when I have come to say I love you so much, it is like I am troubling you….anyway I want to go to South Africa and get connections with my friend Geoffrey, who is a truck driver and I will be sending you a lot of money’.”