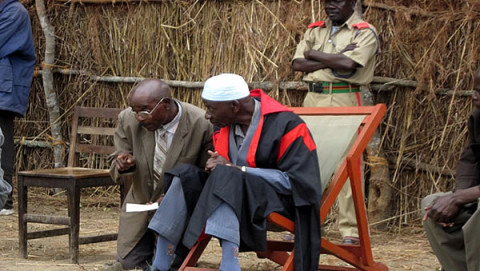 A traditional leader in Kapiri Mposhi district has appealed to government to work on the bridges in his area which have been destroyed by heavy rains to ease transportation in the area.

Chief Nkole of the Swaka speaking people said his area has been partially cut-off from the rest of the district after the collapse of two major bridges across the Lukomba and Mushimbi streams over two months ago.

The traditional ruler made the appeal when Kapiri Mposhi Constituency Member of parliament Eddie Musonda visited him at his palace.

He said government and some Non Governmental Organizations (NGOs) operating in the area were failing to take services to the area due to accessibility problems.

Chief Nkole said the situation has also forced school going children from attending classes because they cannot cross the streams while some farmers are stuck with their farm produce as they cannot easily transport it to the market after the washing away of the two crossing points.

“Our clinic is not receiving medicines timely because the bridge has collapsed at Lukomba stream and most children have stopped going to school because they cannot cross the stream,” Chief Nkole said.

The traditional leader advised government to find a permanent solution to the problem in order to prevent the continual washing away of the two bridges every rain season.

Chief Nkole also urged government to work on the road network in his chiefdom which he described as deplorable.

“Most roads including feeder roads are impassable and my people have a hard time moving farm produce to the market especially during the rainy season, we want government intervention soon,” Chief Nkole said.

But Mr Musonda said he will engage the Council to work on the feeder roads in the chiefdom and other parts of the district.

Recently the local authority procured a grader and will soon buy more earth moving machines to be used on grading feeder roads in the district.