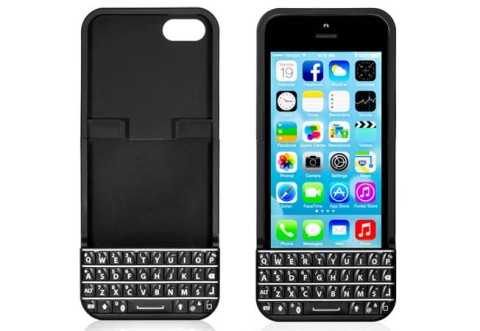 Troubled smartphone maker BlackBerry is accusing a company backed by “American Idol” host Ryan Seacrest of being a rip-off artist.

The allegations emerged in a patent infringement lawsuit filed Friday in a San Francisco federal court by BlackBerry. The suit targets an iPhone keyboard made by Typo Products, a Los Angeles start-up co-founded by Seacrest and entrepreneur Laurence Hallier.

The complaint contends that Typo Products’ keyboard for recent iPhone models illegally copies technology and designs that BlackBerry pioneered years ago for its line of smartphones. BlackBerry is seeking unspecified damages and a court order that would prevent Typo Products from selling the keyboard without a licensing agreement.

The keyboard in dispute hasn’t hit the market yet, though Typo Products has been taking early orders for the $99 accessory on its website and says it’s meant to ship in January. It’s designed to slip on to the iPhone 5 and iPhone 5S so it can serve as a substitute for the touch-screen keyboard built into the software on those devices.

But those phones have been waning in popularity since Apple Inc. released the first iPhone in 2007, threatening BlackBerry’s survival. As part of its efforts to adapt, BlackBerry has introduced smartphones featuring touch-screen keyboards, but the Canadian company is still struggling after suffering a $4.4 billion loss in its most recent quarter.

BlackBerry still sells phones with physical keyboards that the company now says are being cloned by Typo Products.

“We are flattered by the desire to graft our keyboard onto other smartphones, but we will not tolerate such activity without fair compensation for using our intellectual property and our technological innovations,” said Steve Zipperstein, BlackBerry’s general counsel.