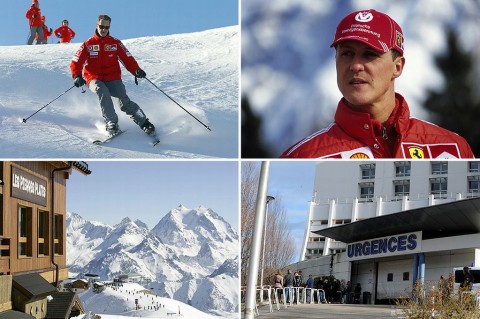 Former motor racing world champion Michael Schumacher is in a coma following a skiing accident in France – and doctors say they “cannot predict his future”.

The 44-year-old German is fighting for his life at a hospital in Grenoble and surgeons are working “hour by hour” to save him.

At a press conference this morning, in Grenoble, doctors said he had suffered many lesions to his brain and his prognosis was unclear.

Surgeons operated to remove a blood clot in his brain and are now trying to reduce “dangerous swelling”, meaning his condition could go either way.

The hospital revealed that Schumacher was being kept in a state of hyperthermia by controlling his temperature to keep it at 34C-35C (93.2F-95F).

He is under general anaesthetic in an induced coma.

“He’s in a critical situation – this is considered to be extremely serious,” Chief Anaesthetist Jean-Francois Payen told journalists.

The doctor said that Schumacher’s family were at his bedside and friends had flown in to the hospital to lend their support.

“We are working day and night at his bedside,” Dr Payen said. “It is too early to say anything as far as prognosis is concerned,” he added.

“On his arrival we examined him clinically and we realised he was in a serious condition, in a coma, with in fact cranial pressure,” Dr Chabardes said.

“The brain scan showed a number of pieces of information, some intercranial haematoma but also some cerebral contusions and oedema.

“So therefore he was taken to intensive care to try to help.

Schumacher was wearing a helmet when he hit his head on a rock while skiing in the French Alps resort of Meribel with his 14-year-old son.

“Someone who had suffered this accident without a helmet would not have made it this far,” Dr Payen said

The area where Schumacher was skiing is part of a web of trails that slice down through a vast and, in parts, very steep snowfield.

Although challenging, the runs are broad and neatly tended, and the off-piste areas – where Schumacher was found – is free of trees.

The motor-racing champion was conscious when first responders arrived on the scene, although agitated and in shock, according to a resort spokesman.

He was first airlifted to a local hospital and then later brought to Grenoble for more intensive treatment, when his condition deteriorated.

The French Mountain Gendarmerie had earlier said Schumacher’s life was not in danger.